Stacking is the upcoming game from Tim Schafer's Double Fine Productions that continues the San Francisco-based developer's experimentation with creating smaller games for digital distribution. Like Double Fine's first downloadable game, Costume Quest, Stacking is being helmed by another rising star in the company, Lee Petty, who last served as art director on Brutal Legend. Schafer and Petty recently dropped by our offices to show off the unique game inspired by Russian nesting dolls. Although the dolls from the late 1800s may sound like an unlikely muse that isn't necessarily a great fit for a game, Stacking will surprise you.

Stacking was born out of a creative exercise at Double Fine, where the company splits into four small teams that quickly prototype ideas into playable demos that could become full-fledged games. In the case of Stacking, Petty found himself inspired as he watched his daughter play with a set of nesting dolls. The notion of each doll fitting into another sparked an idea for a gameplay mechanic that wound up being prototyped by the team Petty headed up. Once the concept was green-lit, Petty began researching both the history of stacking dolls and the era they emerged from for story and gameplay ideas. Given the artistic streak of Petty and his team, Stacking has morphed into a Victorian-era art-flavored hybrid of adventure game and puzzle game that revolves around a young nesting doll named Charlie, who's out to rescue his family.

Stacking's story will unfold via silent-film-style cinematics--which will add up to more than two hours of narrative--that flicker dramatically as text cards pop up. The story finds Charlie's happy home broken up by an evil baron who sends the whole brood into the lively indentured service industry. Charlie, left behind because of his small size, sets out to find and rescue his family using his wits and unique ability to possess other dolls by jumping into them.

The game was demoed for us as both Petty and Schafer talked us through the mechanics and systems on display. The work-in-progress demo we were checking out on the Xbox 360 kicked off with the setup of Charlie's family being split by the evil baron and the tiny doll setting out to save the day. As any first-time hero will tell you, heading out to save the day is a little tricky your first time out of the gate, but Charlie lucks into a meeting with Levi the hobo, a young drifter who's hanging around the train station where the adventure begins.

Our demo showed off two areas: the train station that serves as a hub, since you'll be traveling to different locations to collect your family members, and a cruise ship, which is one of the locations you'll explore. Each area will feature different missions for you that will consist of puzzles to solve. Stacking's puzzle-solving mechanic is an interesting spin on old-school adventure games. Charlie's primary ability is to hop into any doll that's one size larger and that has its back turned to him. Once Charlie is in the doll, he'll have access to its unique action or ability. Figuring out which abilities to use and what order to use them in on either the environment or the other characters you encounter offers a good mental workout. For example, we saw that Charlie needed to board a train to get to where one of his family members was being held. Unfortunately, a train strike had sent three striking workers to go grouse about their situation at an exclusive lounge Charlie couldn't access. To complete the mission, Charlie needed to get the workers out of the lounge and basically create a stacked set of all three of the workers.

While many of the traditional adventure games that Stacking owes a tip of the hat to would have only a single solution, this game features several different solutions to a given problem. There are actually three solutions to the lounge problem, ranging from traditional to unorthodox. The key to all the solutions is in finding the different ways in which Charlie can use the other dolls around him. For example, if you use one doll, you can flirt with a guard who shifts his position and allows Charlie to possess him. Another option lets Charlie possess a doll that can fart into the lounge's ventilation system and flush everyone out, while the last option lets Charlie use a doll's mechanical prowess to open the covering into the lounge ventilation system. When you complete a mission, you'll see a counter showing you how many other options exist to solve it, so you can try to discover them all.

While the train lounge was a pretty simple mission to tend to, the cruise ship offered a much larger environment to interact with and a broader array of puzzles to contend with. While the core mechanics didn't appear to offer any new functionality, the puzzles and options for solving them grew in complexity. The cruise ship challenges were more complex than the initial missions in the game and required smart navigation of the ship and use of possessed dolls. In this particular mission, Charlie's main task was to help a mutiny along, but a number of side quests were available as well. Managing which quest you take on first and trying to figure out how to effectively use all the unique doll abilities kept things interesting in our demo and left us excited to see later levels.

One point to definitely call out about our demo was the strategic use of doll possessing. Besides offering you unique abilities to try to solve a quest, possessing other dolls lets you build up a personal collection you can review in the game's pause menu. Collecting whole sets yields bonuses to encourage you to keep your eyes peeled. The mechanic looks interesting, and we expect it will be challenging when dealing with dolls of varying sizes above Charlie.

The game's presentation makes some unique choices that give the game a fresh sense of style. The art direction is a sly, adventurous mix of old-timey black-and-white presentation with more colorful Victorian flourishes. The objects in the world also have a distinct look to them because the team has drawn inspiration from tilt-shift photography. Charlie and the residents of his world fit the scale of their surroundings without beating you over the head with it. While this may sound a little odd on paper, once you see the game in motion, it all makes sense. The color palette offers a muted, almost sepia tinge to the environments we've seen so far that gives the game a unique look that fits everything nicely. The audio takes a minimalist approach, using sound effects but no voice. However, this doesn't mean Stacking is lacking in the sound department. The game draws on a nice mix of classical pieces of music from Chopin, Mendelssohn, and Tchaikovsky, as well as original material from Peter McConnell, which all suit the unique world.

Based on what we've seen so far, Stacking is looking like a smart, fun, fresh spin on the traditional adventure game experience. The gameplay appears to offer a flexible toolkit for problem solving that puts most of the pressure on your brain rather than twitch reflexes. The art and story are creative and whimsical, which play to Double Fine's strengths, so we're eager to see more of the game. Stacking is slated to be released early next year for the PlayStation Network and Xbox Live Arcade. Look for more soon. 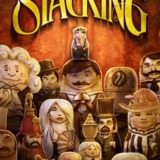