We take a closer look at some of the gameplay mechanics in the upcoming entry in the SSX franchise.

SSX 3 is the third installment in Electronic Arts' popular snowboarding franchise. The game will offer a significant upgrade over the previous two entries in the franchise while building on the solid core gameplay elements. However, SSX 3 is, in many ways, a new beginning for the franchise, thanks to some radical tweaks to the existing SSX formula. While fans of the franchise are intimately familiar with the ins and outs of the different events as well as the score and combo systems in the game, there have been some changes and additions.

The Big Air events in SSX 3 will be broken up into four heats. The goal of the first three heats is to earn the most points possible in each. The catch is that each run is timed, forcing you to keep a brisk pace while performing tricks. If you linger too long performing tricks and are unable to complete the race before time runs out, you won't be awarded any points and will be forced to wear a "scarlet letter"-type label--DNF, which stands for "did not finish"--for the rest of that heat. Scores for five CPU opponents will be tracked to give you a sense of what the competition is up to. You'll see a listing of your competitors' runs before and after each heat to help you manage your sense of accomplishment. After you've finished three heats, your best two scores will be combined to give you a final score. If you manage to place in the top three, you'll advance to the final round. If you rank fourth or below, you won't progress to the next level, but you'll be given the chance to redeem yourself by trying those three heats again. The big challenge in the three heats is that the point multiplier icons you can pick up to boost your score won't regenerate, which forces you to try new routes on your runs if you want to go for the best scores. The final round, the fourth heat, is where you'll be competing to get a gold, silver, or bronze medal by placing first, second, or third, respectively. The saving grace is that the point multipliers are regenerated on the slope, maximizing your score options, which you'll need since your CPU opponents are a pack of high-scoring freaks. As always, you'll be shamed if you can't finish your run on time.

If you want to be a contender in SSX 3, you'll need to familiarize yourself with the game's scoring and trick systems, which have been tweaked some since the previous entries. While the game is pretty generous with doling out points, you'll score some extra points every time you land a trick. Successfully pulling off tricks has the added benefit of filling your adrenaline meter, which will let you temporarily boost your speed. You'll also be able to perform ubertricks once your meter is full.

If you want to rack up a ton of points, there are a few things to keep in mind about how scoring works in SSX 3. Grabs earn you points based on the level of difficulty. The number of points can be increased by holding the grab as long as you can to tweak the move and increase the difficulty. Spins and flips start out with a basic reward based on the degree turned and the number performed respectively. To boost your score you can combine spins and flips into mistys, rodeos, and many other variations. When you really get a handle on the control, you can throw in stalls and off-axis spins and change it up in midair, which will yield a new bonus. Slides get you points for landing on, sliding off, and jumping off a rail, log, or similar object. The duration of your slide determines how many points you'll get. If you want to boost your point reward during a slide, you can pull off board presses, spins, and ubergrinds while on the rail as well. One benefit to sliding is that you can't lose the points you earn on a rail if you wipe out while landing.

While all of this is probably old hat to SSX veterans, there are quite a few new tricks to work into your repertoire, including handplants, board presses, ubertricks, and monster tricks. With a handplant, you'll earn a flat set of points for executing the move, but you can seriously bump up your earnings by holding the move and keeping your balance. A handplant has the added benefit of letting you access high rails or get over fences. Board presses are a valuable new way to create combos. You'll be able to boost the flat set of points you earn by keeping your balance during the move and by pivoting your board's nose or tail presses into butters. Ubertricks, which are moves you can perform once your adrenaline meter is full, are a good way to rack up points. Ubertricks are scored like grabs, with points for execution and points for holding. Every time you perform one you'll earn a letter that will count toward spelling "uber." If you manage to completely spell the word, you'll be able to perform a super ubertrick. While risky to perform, the flashy moves are worth a nice chunk of points. You'll also be able to perform ubergrinds by hitting a rail with a full adrenalin meter and pressing one of the four basic grabs. As with normal grabs, the longer you hold the move, the more points you'll earn. You'll also be able to buy new ubertricks and super ubertricks that you can add to your trick list. The more expensive the trick, the greater the point reward. Monster tricks are trick combinations that, when performed in the proper sequence, will earn you a ton of points. While it's possible to accidentally discover them as you play through the game, you'll be clued in to the various combos when you complete certain events. You'll discover that combos will yield special bonuses. For example, if you string airs, rail slides, and presses back-to-back, you'll create a combo line. Every trick you do in a successful combo line is worth an extra point. The later in a combo you perform a trick, the higher the bonus. Finally, it will be possible to rack up a style bonus by adding some variety to your trick routine by stalling or changing your spins and flips.

Due to the vast array of options open to anyone looking to earn a hefty point total, it's hard to blame the SSX team for being a bit evil with the scoring system. Repeating the same set of tricks or combos regularly will significantly reduce the points you'll earn from them. As a result, it's in your best interest to keep your runs fresh. Anyone hankering for these kinds of challenges should keep their eye out for SSX 3 when it ships this fall. 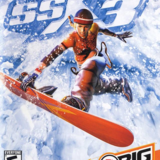