Cloud gaming platform Shinra Technologies has announced the launch of its Prototype Accelerator program, an initiative intended to assist chosen developers during the prototype phase of development for games that are designed around its cloud computing technology.

Indie developer Camouflaj is the first to partake in the Prototype Accelerator program. The studio is best known for its action stealth game Republique, which received over $500,000 in crowdfunding and was released in December 2013.

Shinra Technologies senior vice president Jacob Navok described the program as being "aimed at teams with established track records of quality game production that are interested in doing something ambitious and new, and have been frustrated by their ability to create games based on the limits of current technology."

Square Enix announced Shinra Technologies at Tokyo Game Show last year, where it told GameSpot that the cloud gaming service "replaces the console with a supercomputer."

According to the Square Enix, Shinra Technologies differentiates itself from the competition by allowing developers to use the power of multiple servers, providing more resources for better physics and greater graphics in order to create new games. Shinra Technologies is based in New York, where it focuses on developing cloud technologies. 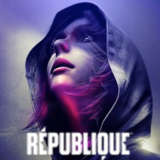