The PlayStation 2 will see more in dragon-riding action in spring 2005.

TOKYO--Square Enix has announced that it is making a sequel to its apocalyptic dragon-riding game, Drag On Dragoon, known as Drakengard in North America. Slated for release on the PlayStation 2 in spring 2005, the sequel will be titled Drag On Dragoon 2: Love Red, Ambivalence Black. The game will once again be developed by development studio Cavia.

Square Enix has opened a teaser site for Drag On Dragoon 2, which currently features a 51-second trailer with a few scenes of the game in the second half. The teaser hints that the sequel takes place in the same world as the previous installment, only 18 years later.

It's unknown at the current time whether the main character, Caim, from the original installment will be appearing in the sequel. Mana, the little girl who brought doom to the world in the original Drag On Dragoon, appears as an adult in the Drag On Dragoon 2 trailer. Although she no longer seems to be an evil character, she is once again expected to play a key role in the game's storyline. 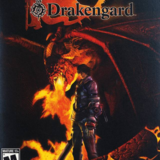