Last month, Square Enix president Yoichi Wada appeared on a Tokyo Game Show panel about the waning influence of Japanese game makers. He said Japan was no longer the leader in the worldwide gaming industry, having lost too much ground to rising markets in the US and Europe.

If Wada can't lead them, he'll apparently join them. Square Enix today announced a strategic partnership with Gas Powered Games that will see the creation of a sequel to the Redmond, Washington-based studio's large-scale real-time strategy game Supreme Commander. Square Enix didn't specify what its role in the game's creation would be, nor did it reveal any details on platforms, release windows, or gameplay features.

Square Enix did say that the collaboration is a step toward the goal of boosting its Western development for global audiences. This also appears to be just one of numerous upcoming partnerships, as Square Enix described such collaborations as "a new cornerstone of its strategy to create games targeted primarily at consumers in Europe and North America."

For more on the original Supreme Commander (published by THQ), check out GameSpot's review of the original PC edition of the game. 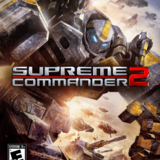