Back when Square Enix released Dragon Quest VIII in Japan last year, the game came with a trailer of a new project titled Code Age. Since then, Square Enix has started to run a manga series that carries the project's name in its monthly Gangan magazine in Japan. According to the latest issue of Famitsu magazine, Square Enix is also developing an action role-playing game titled Code Age Commanders for the PlayStation 2, which will have the same setting as the manga but will feature different characters.

Code Age Commander is a unique project for a Square Enix game, as its lead developers come from the art field rather than project management.

The game is being produced by Naora Yusuke, who has worked as an artist for many of Square Enix's games, including Final Fantasy X and Unlimited SaGa. Its director will be Toshiyuki Itahana, who worked as one of the character designers for Final Fantasy IX. Naora will also be working on the concept art for Code Age Commanders, while Itahana will be working on its character designs.

The project will have Akitoshi Kawazu as its executive producer; Kawazu is known as an experienced director and the father of Square Enix's SaGa RPG series.

Code Age Commander takes place on a futuristic planet known as the "intra-globular world." The planet relies on an ancient floating object called the Central Code for its life-forms to exist, much like Earth relies on the sun.

Humankind has learned that the transmigration is coming in the near future and builds a floating ark around the Central Code so that extinction can be avoided.

Code Age Commander is currently 50 percent complete and slated for release within the year in Japan. 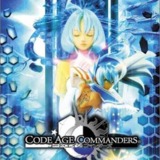