Square Enix seems to have plans for the arcade scene in Japan if games like Gyrozetter are anything to go by. In a recent press conference streamed live at Nico Nico, the publisher announced yet another new arcade game titled Gunslinger Stratos, at the same time revealing a site for the game.

The game is a four-on-four action shooting game, where players can use two guns to combat each other onscreen. Each arcade cabinet will have two gun peripherals and a 60-inch plasma monitor. Players will get to fight using three methods of combat: a double gun style with dual-wielding pistols; a side style, in which they must combine the device side by side to mimic a machine gun or shotgun; and the tandem style, in which they must combine the guns one atop the other to form a rocket launcher or heavy weapon.

Gamers will get to select different characters, with each of them having access to different types of weapons and power-ups. The game will also feature destructible environments that affect the layout of the stage.

Apart from local play, players can choose to take the fight online against other players all across Japan. Other modes include personal missions and cooperative missions. Players will also be able to link up their personal data via the NESiCA mobile site, where they can customize selected characters and weapons, as well as purchase in-game items using in-game points.

The game is developed by Byking, the company responsible for the Gundam Vs. arcade game. The producer is Nobuki Kadoi, whose previous acclaim was the arcade title Lord of Vermillion, while the game's lead director is Byking founder Shinichiro Obata, who previously worked on the Street Fighter and Darkstalker series. The character design work is done by Mari Shimazaki, known for creating designs for characters in Bayonetta and Okami.

Gunslinger Stratos is slated for a 2012 summer release in Japan. 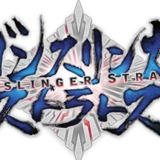