Vivendi Universal today announced the debut of Spyro the Dragon on the Nintendo DS in Spyro Shadow Legacy, set for release this fall with a suggested retail price of $29.99. The game is currently in development by Amaze Entertainment, which previously worked on games from the Lord of the Rings and Harry Potter franchises.

Spyro Shadow Legacy will introduce magical powers, martial arts combat, and light role-playing elements to the series. It will also take advantage of the Nintendo DS's unique functions, with the touch screen allowing players to draw symbols that cast spells and the top screen being used for a map. The system's wireless connectivity feature will be used to trade collectible creatures with nearby players. 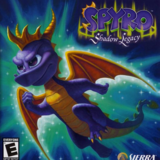