You'll be able to give Spyro a smooch before you start playing.

The Nintendo Switch has some solid Pro Controller alternatives in PowerA's wireless, "enhanced" pads. Now, the company is adding a Spyro-themed version to its lineup, and in addition to the new design, it boasts everything that PowerA's previous controllers have featured.

The wireless Spyro Controller released on Amazon on Friday, just in time for Spyro Reignited Trilogy's Switch release on September 3. We've been impressed by PowerA's output for Nintendo Switch, including its wired controllers, which come at a cheaper price tag.

See it at Amazon

As for the Spyro-themed pad, it's officially licensed by Nintendo and has the ability to map buttons to the two triggers situated on the back of the controller. It also features motion controls and Bluetooth connectivity; however, there's no rumble or NFC compatibility, meaning you won't be able to scan any Amiibos.

On top of that, you'll need to power the controller with two AA batteries. This gives you up to 30 hours of gameplay, and while it may seem like a negative compared to the Pro Controller's recharging battery, I personally prefer this. The Pro Controller's internal battery is convenient, but when it loses its charge, you won't be able to use it wirelessly any longer. That hopefully won't happen until far after the Switch's lifespan, but as someone who likes to revisit their favourite games (and has been burned by a couple of dead PS3 controllers), I appreciate good quality controllers that come wired or battery-powered.

As for Spyro Reignited Trilogy, it released on PS4 and Xbox One last year on November 13. Reviewer Justin Clark called it "the best kind of collection that not only brings a beloved series up to current visual standards but also proves just how well-built the original titles were." You can check out the score and read our full Spyro Reignited review here. 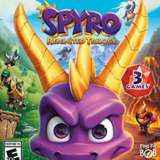