Loid Forger and some of Shonen Jump's newest and more popular heroes are headed to tactical RPG Captain Velvet Meteor next month.

Hit anime series Spy X Family doesn't have a video game adaptation--yet--but at least one of the show's characters will be playable in Captain Velvet Meteor: The Jump+ Dimensions which releases on July 28. Master spy Loid Forger joins several Shonen Jump heroes in the Switch game, bringing his own unique skills and abilities alongside Hell's Paradise: Jigokuraku ninja Gabimaru, 'Tis Time for Torture's Princess, and Kafka Hibino from Monster No. 8. The full character lineup includes:

Captain Velvet Meteor: The Jump+ Dimensions follows the protagonist Damien as he retreats into an imaginary world and battles against the forces of evil alongside heroes from his favorite Shonen Jump and Jump+ manga. Each fight has a strategic element to it, and Damien can use the signature abilities of his manga heroes to defeat his enemies.

The game was briefly shown off in this week's Nintendo Direct, and you can see the trailer in the timestamped video below:

In case you missed it, Spy X Family has emerged as one of the most popular anime series of 2022 so far. Adapted from the original manga created by Tatsuya Endo, the show follows a spy as he establishes a family that will help him get closer to a target who threatens the safety of the world. To accomplish his goals, Forger adopts a young orphan girl named Anya and marries a woman named Yor Briar, but he is unaware that his adopted daughter is psychic and that his wife is one of the deadliest assassins in the world. Also, the family takes in a dog that can see the future.

While the concept is wild, Spy X Family has been met with rave reviews for how it balances comedy, action, and drama to great effect. Anya has also become meme material, thanks to her smug anime face.

In other animated news, the Lord of the Rings anime movie has revealed more details on its plot and cast, Tekken fighting game series director Katsuhiro Harada has hyped up the Tekken anime series coming to Netflix, and the Cyberpunk 2077 anime series has confirmed a September release date. 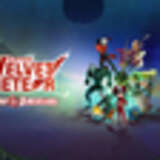