Mad Magazine's monochromatic secret agent duo is coming to the Xbox soon courtesy of Global Star and developer Vicious Cycle. We recently went a few rounds in the aptly titled Spy vs. Spy, which looks to offer some neat hooks for fans of the classic 'toon pair (and who doesn't find them at least a little amusing?). It's also got some solid competitive action to offer anyone with Xbox Live...or even just a bunch of controllers and a few friends.

Spy vs. Spy offers your basic third-person-shooting formula, which, in this case, pits you (as the white or black spy) against the spy of the other color, as well as a couple of apocryphal red and blue spies. You start the game with only a few basic attacks: a slingshot, a club, and the ancient, mystical martial art called "spy-fu." As you kill the other spies, you'll accumulate "bux" that you can put toward more-destructive weaponry, from a machine gun to a rocket launcher to a flamethrower. In addition to outright offensive weapons, you'll be able to purchase booby traps that you can place around the map to comically snare your opponents when they're not paying attention.

Aside from the madcap deathmatching, your primary goal in a Spy vs. Spy match is to recover a number of hidden treasures that are stowed in safes scattered around the map. The first spy to get all the secret items wins the game, but if you're killed, you'll drop one of these items, and you'll have to retrieve it from whomever killed you. In the level we played, several hallways extended off a main courtyard area (which was itself the scene of extensive carnage), and each of these offshoots contained a devious obstacle course that guarded the secret item we needed to obtain. One area had suits of armor attempting to cleave our hapless spy with giant axes, while another required us to hit a moving target with the slingshot to extend a bridge across a chasm.

The gameplay in Spy vs. Spy had a nice pick-up-and-play feel to it that should be easy for just about anyone to get a handle on. You can lock onto other spies to make aiming easier, and you can purchase and cycle through weapons as easily as hitting a button. The game has an authentic look to it, too. So if you're familiar with the Mad original, you'll recognize its exaggerated art style in the characters, backgrounds, and, especially, the weapons.

Our favorite thing about Spy vs. Spy? It's only $20. And for that generously low price, it looks like you'll be getting a good amount of content, including multiple gameplay modes and lots of unlockable content, like new spy costumes (we saw clown, samurai, and mechanic clothes, among others). Spy vs. Spy is due out later this month, so look for more on the game soon. 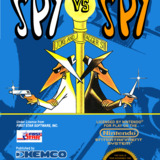