Konami shows its Xbox soccer game at TGS, but only in video form.

At the Tokyo Game Show 2001 Spring, Konami showed three of its Xbox games in video form only. One of the three games shown was Jikkyo World Soccer 2001. Only bits and pieces of gameplay were shown, but judging from this early version it is pretty evident that the finished game could end up being truly impressive visually. At this stage, the players displayed emotion through advanced facial animations and such effects as hair flowing in the wind added to the game's overall visual quality. The stadiums were equally as detailed, with crowds waving team-specific flags and bump-mapped grass on the pitch.

Jikkyo World Soccer 2001 will be released in Japan this year. A North American release has not been confirmed at this time. 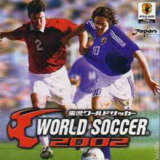