Spot On: Games get political

Using both propaganda and education, games are making ripples in the political world.

For years, politicians have tried to score points with their "family values" constituents by trying to regulate the content of video games. Now the tables are turning as gamers have unwittingly had a hand in shaping the discourse in the 2004 presidential election.

Joe Trippi, the former campaign manager for Howard Dean’s presidential bid, has revealed that some of the tactics he pioneered, which led to Dean’s early momentum, were inspired by a gamer’s forum. In his book The Revolution Will Not Be Televised, Trippi explains that in the late 1990s, he was a regular poster on a forum for THQ that drew gamers and investors. One man, David Haines, was a favorite, and his funny and informative posts were the hit of the message board. Through Haines’ regular posts, readers learned about his personal life. Apparently, he was in his late 20s or early 30s. He was a triathlete, and he had two pets. Readers also shared the special moments in Haines’ life, such as when his son Christian was born.

Eventually, the day came when a poster informed the group that Haines had died of a heart attack. As Trippi read posts eulogizing Haines and sat at his keyboard crying for a man he’d never met, he realized the message board had created a virtual community.

When he later headed up the Dean campaign, Trippi successfully tapped into the Internet community to build an early base of grassroots support for his candidate. While the Dean bid burned out in the days after the Iowa caucus, many of the issues that fueled that support were adopted by John Kerry’s campaign and continue to be in the spotlight.

Trippi, who also happens to be a gamer, told GameSpot that he predicts that the line between politics and games will continue to blur. He believes a commercially successful political game is just "minutes away." He sees the interactive element as being the strength of games and said that the online world may be one of the few remaining places people can go to share experiences.

"There are not that many common experiences Americans have anymore," Trippi said, adding that the only events experienced by a mass audience are major sports events, such as the Super Bowl, and breaking news of the tragic or trashy ilk. Even popular television shows--at least since the advent of technologies such as TiVo--are no longer seen simultaneously.

Trippi believes games have the potential to fill that void.

Kuma/War, the subscription-based shooter game that models gameplay after real-world US military engagements around the world, is a step toward making a news event a shared experience. While the game has stirred some controversy for depicting battles in a war that is still happening, it can increase awareness of important news events, Trippi said.

That’s exactly what the makers of the game were aiming for, said Keith Halper, the CEO of Kuma Reality Games. Each of Kuma/War’s scenarios begins with a short newscast, and Halper hopes that by giving gamers a more in-depth understanding of the conflict and by letting them walk a mile in a soldiers’ shoes, the game can encourage them to seek out more information on their own. "If you want to provide information, you [need] an audience. So you have to get them there," Halper said.

Makers of games like Kuma/War claim they present the subject in a neutral fashion, but the act of depicting a war is inherently political. Kuma, for instance, avoids war’s messier aspects. There are no legless children, for example, and you won’t have to watch your buddy bleed to death after being ambushed by a sniper.

In that respect, says Ian Bogost, a professor at the Georgia Institute of Technology, even a game such as Call of Duty can be viewed as having political content, since it has its own point of view. In this case, it's unreservedly celebrating the exploits of the Allies in World War II. Bogost also coedits Watercoolergames.org, a discussion board and archive of political games.

Games that immerse the player in an experience can often be the most effective political games, Bogost said. "The way I try to use games is by taking advantage of the ability to simulate an experience inside a video game."

One of the most high-profile games with an agenda is America’s Army, a recruiting tool that seeks to interest teens in a military career through its first-person-shooter perspective. On the other end of the political spectrum, but in many ways similar, are Under Ash and its sequel Under Siege, which play out conflicts from a Palestinian point of view.

But to truly immerse a player in a gameworld means giving them choices, and that freedom means ceding control to gamers, which is something that makes developer’s nervous. For example, the developers of Atari’s Temple of Elemental Evil role-playing game were forced to remove all the children non-player characters from the game, because the publisher feared that a player might try to attack them. Ultimately, the game shipped in a somewhat buggy and unfinished state, but the developers did find the time to remove the kids.

If publishers are resistant to depicting children in a fantasy RPG, they’ve been even more gun-shy about tackling serious issues. Bogost hopes that’s a trend that will change, and he hopes that game makers will bust out of the status quo to create new genres of games. "I would like to see more experimentation in the business. I would like to see more risk-taking," he said.

Bogost is anxious to see a political game achieve popular breakthrough status, just as Michael Moore’s anti-Bush Fahrenheit 9/11 did for film. In fact, Bogost said he has approached a game publisher with the idea to create a game based on the film--and he volunteered his own services as a game designer for the project. But while a Fahrenheit 9/11 of games has yet to come along, games with political content are nothing new.

Chris Crawford, who could be called the father of political games, may well have created the first one with the obscure Energy Czar for older Atari computers. Sometime later, in 1985, he would go on to create Balance of Power, a cerebral Cold War simulation. He’s currently considering a modern update to the game, called Balance of Power in the 21st Century.

Although Crawford is disappointed with the current crop of games, he sees a lot of potential in the medium, which can go beyond teaching facts to involving players in processes. "You don’t do a game that says [President] Bush is a dummy. That is a waste," Crawford said, using the Fahrenheit 9/11 example. "Instead, you would make a game about foreign policy and how foreign policy works." Then, the player could see for himself how the neoconservative approach to world affairs plays out, Crawford said, suggesting that it’s really all about learning and that, in the end, that’s what keeps players coming back for more.

"When people understand the process behind a truth, they understand that truth more deeply," Crawford said. "True fun is the emotional response to learning."

One soon-to-be released PC game that examines political process is Ubisoft’s Political Machine. The game, developed by Stardock Entertainment, models the 2004 presidential contest and challenges players to manage the campaigns of Bush or John Kerry in their quests to take--or retake--the White House. In addition to the "historically correct" Bush-Kerry race, players can choose to run a candidate of their own creation, or they play as one of the premade pols from the past or present.

Wardell doesn’t think publishers or the public will embrace a game that pushes a particular point of view.

“Ubisoft and other top-tier publishers, in my opinion, would not likely want to associate themselves with a game that has such an explicit political agenda. I think they'd rather focus on delivering world-class games to people of all political persuasions.”

Whether a game like Political Machine can ever duplicate the mass appeal of sports franchises remains to be seem. Perhaps there will be a day when players will look forward to a Madden-style political series like Tucker Carlson’s Election 2008 or James Carville’s Campaign Manager. In the meantime, the most likely agent for change will be small developers who can market their games directly over the Internet.

Independent groups have already been hard at work on games that big publishing houses would never touch. Waco Resurrection (waco.c-level.org) is a third-person shooter that outfits players in a plastic helmet designed to look like David Koresh. The headgear contains a microphone, and by shouting phases from the Book of Revelation, players can activate special powers as they guide their Koresh avatar during the 1993 siege of the Branch Davidian compound.

September 12th (www.newsgaming.com)--whose creator insists that it "is not a game"--challenges the player to fire cruise missiles at terrorists in a densely populated Middle Eastern city. As the explosives wreak havoc, civilians weep over the casualties and morph into terrorists themselves, creating an ever-growing number of enemies.

Kuma/War’s Halper said that at the most basic level, there really is no difference between a political game and an educational one. Both are trying to teach the player about a process, an idea, or a concept, and by involving the player, games are an effective medium for doing so. Halper recalls the Maxis classic SimAnt, which casts players as a single ant working for the benefit of the colony. To be successful, players needed to learn a lot about an ant’s life.

"I know everything about ants from that game," Halper said. "Games are just the best way to learn." 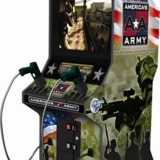