A good chunk of the GameSpot crew is in Japan this week, getting ready to bring your complete coverage of the 2009 Tokyo Game Show, which begins on Thursday of this week. One of the things I hope to do while here covering the show is illustrate the Japanese perspective on sports games. Soccer and... 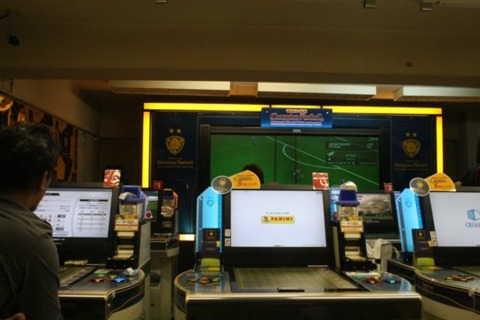 A good chunk of the GameSpot crew is in Japan this week, getting ready to bring your complete coverage of the 2009 Tokyo Game Show, which begins on Thursday of this week.

One of the things I hope to do while here covering the show is illustrate the Japanese perspective on sports games. Soccer and baseball games are kings here on consoles and, if the past is any indication, we'll see a bunch of horse racing sims, exercise games, and maybe even one or two surprises on the TGS show floor. Hell, last year, I got roped into playing a Hawaiian hula game on camera which might be considered a sport somewhere.

You don't have to hit the TGS show floor to find sports games in Japan however. You can just hit any local arcade, particularly the ever-present Club Sega's, located in places like Akihabara, Shinjuku, and elsewhere. As the name suggests, Club Sega locations are packed to the gills with games made my Sega and, on the sports front, you can expect to see Virtua Tennis arcade cabinets, racing games like Initial D, and, perhaps most impressively, World Club Champion Football.

World Club is so popular that it often takes up an entire floor of the multi-level Club Sega--it occupies the top floor in the Akihabara locale, for example. One part massive arcade cabinet, one part management/strategy game, and one part collectible card game, WCCF is tremendously impressive, even if--like me--you have no idea how to play it.

My mystification at WCCF doesn't surprise me; the game's heavy reliance on text coupled with the language barrier, plus an overall lack of soccer strategy fundamentals, means that this game is out of my understanding's reach. However, there are aspects of WCCF's popularity that any game fan can relate to, namely, its collectible nature.

You start with WCCF here: 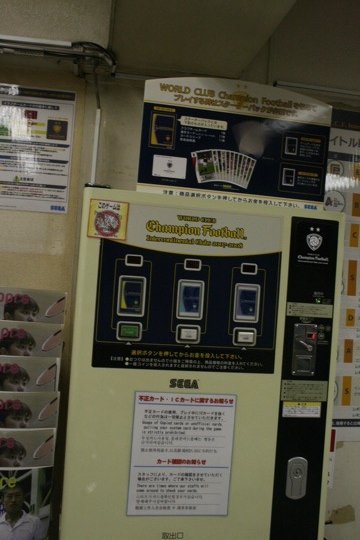 This is a station where you buy a starter pack of WCCF cars; you can also buy booster packs and handy plastic sleeves that will protect your cards from constant use. A starter pack runs you about 1000 yen, or around $10. I bought a pack yesterday, here's what came inside: 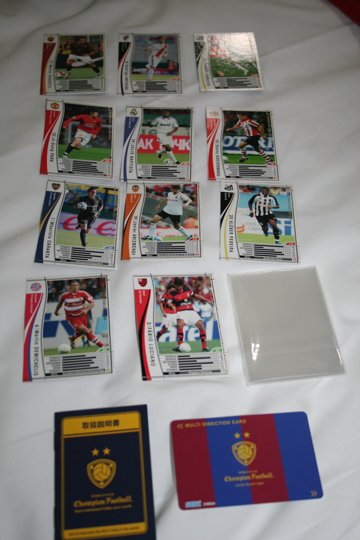 In that set, you'll find your manager card, which is used to keep track of your record when playing the game, a small rule booklet illustrating the rules of WCCF (in Japanese, of course), plastic card sleeves, and finally eleven player cards, enough to field a full team in the game. Here's the players that were included in my pack:

Here's a close-up of the Ji-Sung Park card: 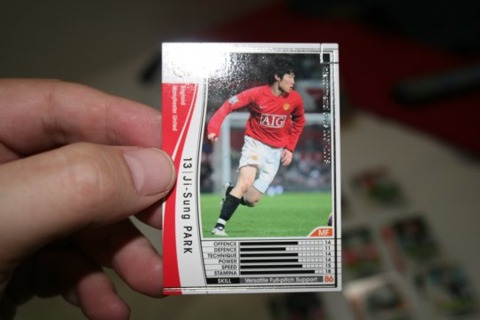 Flip each card over, and you'll see a description of the player, his ability ratings, and an picture of the field along with areas indicating where that player is at his best. It seems that the majority of the strategic calls you make in WCCF are based on this type of information, including which formation you use and at which point you sub players in and out.

With your virtual team set, you simply take a seat at the closest WCCF table, lay out your cards in the formation you want and then fire up the game. Presumably there's some sort of electronic magic that happens with the cards that allows them to be read by the WCCF tables. Judging from the instructions, and from watching people play the game, you have a measure of control over your players in a match--with big, brightly colored buttons available you can press to take a shot on goal or activate a key player on your team.

One thing is for sure, fans take WCCF seriously. It's not unusual to watch people play the game for huge stretches of time--drink in hand and burning through cigarettes all the while. Good thing too, as a single sitting at a WCCF table will cost you another ten bucks (or 1000 yen). That said, there seems to be a lot of things to do--from playing a match to running practices, and so on.

Of course, the on-pitch action is just half the fun--this being a collectible card game, there's probably just as much intrigue in trying to assemble your perfect deck of cards. Consider the magazine I found in the Club Sega, devoted specifically to recently released player cards--the perfect reading material for that obsessive WCCF player looking to get ahead in the game. 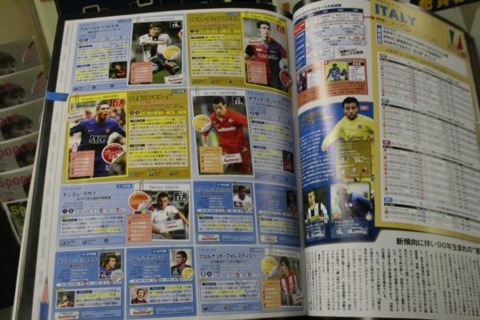 I doubt World Club Champion Football would work in America--arcades are dying, if not dead, soccer is of little importance to Americans, and the game itself is a serious time- and money sink. That said, there's little denying its popularity here in Japan. Moreover, it seems to have attracted the attention of its competitors; Konami recently released a collectible card game in arcades based around its Baseball Stars franchise. Now, that might be an idea worth pursuing in the U.S.... I know it might bring me back to the arcade.