The Cosmic Shake will be a 3D platformer with themes focused on the worlds, costumes, and banter between SpongeBob and Patrick. Players will travel throughout different periods, such as the Wild West, Prehistoric, and more, while Patrick accompanies you as a small balloon.

In SpongeBob Squarepants: The Cosmic Shake, SpongeBob messes with the fabric of the universe while playing with a vial of wish-fulfilling Mermaid's Tears. Because of that, Patrick is turned into a balloon. This sends SpongeBob on an adventure across time to fix his mistakes and restore Bikini Bottom.

In Battle For Bikini Bottom: Rehydrated, players were able to play as SpongeBob, Patrick, and Sandy. But, The Cosmic Shake will only have SpongeBob as a playable character, so THQ gave him more abilities, such as a flying karate kick or being able to roll around on big rocks. In addition, players will also have the opportunity to unlock classic costumes for SpongeBob too.

SpongeBob Squarepants: The Cosmic Shake currently does not have a release date. But it's expected to launch on the PlayStation 4, PlayStation 5, PC, Nintendo Switch, Xbox One, Xbox Series X|S, and PC.

For more news on the THQ showcase, check out these stories: 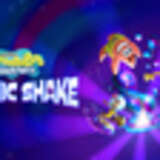