SpongeBob SquarePants: Battle for Bikini Bottom Rehydrated, the HD re-release of the 2003 cult favorite, was a big sales success for publisher THQ Nordic.

CEO Klemens Kreuzer told GI.biz that the game has already passed 1 million unit sales, and he believes the figure could reach 2 million.

"It was a fantastic success for us, with sales of more than one million units--and I wouldn't be surprised if it reached two million one day," he said. "I think there's a market for those kind of games. The community was so full of joy."

THQ Nordic recently purchased the developer of the game, Purple Lamp, and the studio is working on two additional licensed games, Kreuzer said. The executive acknowledged that the licensed games business has fallen out of favor in terms of public perception among some groups, but he stressed that THQ Nordic is taking a different approach.

THQ Nordic's licensed games don't need to sell "millions and millions" of copies to make a profit, Kreuzer said. They aren't in the "super AAA" category, so development costs may be lower than compared to other licensed games. Additionally, Purple Lamp is a team of under 40, which is significantly smaller than many studios that work on licensed games.

"I think maybe in the licence business there has been a bit too much emphasis on free-to-play and the premium model was not so popular in the last five to ten years," he said. But at THQ Nordic, we're not going for the super AAA stuff where we need millions and millions to be successful," Kreuzer said. "We can do that with relatively low volumes, so that's why we think we can recreate the success we've had with SpongeBob with other licences in future. We're working on some of those right now."

Not every review for Rehydrated was a positive one, but Kreuzer said he's encouraged to see the emotional attachment that people have to classic franchises and cult favorites like Battle for Bikini Bottom.

"You can see how emotional people are about these games, that they have good memories from their childhood and they really enjoy coming back to those places," he said.

Following its release on console and PC, THQ Nordic is bringing Rehydrated to mobile devices on iOS and Android very soon with no microtransactions at all.

Outside of this, one other major licensed game in the works is a new James Bond project from the developers of the Hitman series. 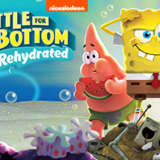