Namco's gory TurboGrafx-16 action game is headed to the Virtual Console next month, along with Double Dungeons.

Hudson Entertainment has updated its list of upcoming TG-16 Virtual Console games with news of Splatterhouse and the role-playing game Double Dungeons.

Originally released in 1990, Splatterhouse casts players in the role of a young man who must fight his way through a monster-infested mansion to save his girlfriend. Players can make use of meat cleavers, 2x4s, and shotguns to dispatch zombies, leeches, wolves, and even a bag-headed, chainsaw-armed...thing. A 1989 release, Double Dungeons was an RPG that gave players a first-person perspective as they traversed catacombs and did battle with slimes, hornets, and other denizens of dank caverns.

Splatterhouse and Double Dungeons are scheduled for release in March, with each game being available for 600 Wii Points ($6). 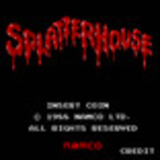