Splatoon 3: Everything We Know

Splatoon 3 is coming to Nintendo Switch very soon; here's everything we know so far about the colorful shooter sequel.

Splatoon has been one of the most surprising new franchises from Nintendo in recent years, a wild combination of shooter and zone control in a stylish multiplayer package. Splatoon made a splash on Wii U and Splatoon 2 was one of the earliest games on Switch. Now with Switch well-established and extremely successful, Splatoon 3 looks to bring back the inky magic. Here's everything we know about Splatoon 3 so far, including the release date, multiplayer details, a free limited-time demo, and what to expect from the single-player campaign mode.

Splatoon 3 is scheduled to release on September 9, 2022. Technically this still makes it a summer release for North American audiences, as autumn officially begins a few weeks later. Its release date came as another game originally scheduled for September, Xenoblade Chronicles 3, was pushed forward to July. But players can get an early taste in late August with a free demo event.

To prepare for launch, Nintendo is holding the first Splatfest of Splatoon 3 as a free demo event. The "Splatfest World Premiere" will be held on August 27 from 9 AM - 9 PM PT / 12 PM - 12 AM ET. TAs mentioned, this will be players' first taste of the new tri-color Splatfest (detailed below). The question for this inaugural Splatfest will be the classic three-way competition: rock, paper, or scissors.

Splatoon 3 was officially announced during the February 2021 Nintendo Direct. Nintendo closed out that presentation by showcasing the game's reveal trailer, which gave us a look at some major changes for the series. The most obvious is the setting: Splatoon 3 takes place in an arid desert wasteland known as the Splatlands. At the heart of the desert is a new hub city called Splatsville, where players will gather between matches.

The trailer confirmed the series' signature 4v4 Turf War mode will return in Splatoon 3, but this time, there will be new stages set in the wilds around Splatsville. Nintendo also teased there will be new moves and weapons, as well, such as a new bow and a crab-shaped autobomb. It also appears that players will now launch themselves onto the map from the air rather than spawning in at designated locations. This could have big ramifications for the late stages of matches if it lets players land in contested areas to quickly spray down their ink before the timer runs out.

Like the previous games, Splatoon 3 will feature Splatfests--large-scale social events where the community settles as poll question by choosing team colors. This time, though, the Splatfests can consist of not two but three choices. Players will fight in a 4v4 Turf War style match for the first round, and then convert to a tri-color second round. The first-place team will start in the center while the other two teams will start on opposing sides, giving the leader more of a challenge to defend their turf. The first such Splatfest will occur in late August as a free event, before the launch of the game. Check below for more details.

Nintendo has also confirmed the return of Salmon Run, this time with a video showing its "Next Wave." This version will once again feature cooperative play as you work with teammates to take out the enemies in wave-based rounds. You'll have to take on new large-scale bosses like Slammin Lid, a UFO that creates protective barriers, and Big Shot, a muscley salmonid that fires cannonballs. A massive king salmonid called Cohozuna shows up as the final challenge before you complete a stage, and you'll have to take it down with a special egg cannon. Nintendo has also said a Big Run mode will have salmonids invade the city itself, as a special event that occurs every few months.

The story mode appears to be mystery-themed this time around. "Return of the Mammalians" sees your Inkling team up with Agent 3 and your sidekick Smallfry, where you'll learn about the "Fuzzy Ooze," and, hopefully, finally get some answers about just what the heck happened to turn squids into kids--and where all the humans went. Nintendo promises this will serve as the "epic finale" of the story that Splatoon has been building to over the last few games.

Finally, Splatoon 3 will add a new card-based minigame called Table Turf Battle. The 1v1 competitive mode has you place cards with geometric shapes, similar to Tetriminos, on a board. Your goal is to claim territory by placing blocks of your own color on the board, similar to the main Splatoon objective. Each player will get a starter deck, and there will be 150 cards to collect in all.

Multiplayer is the foundation of the Splatoon series, and it's once again the central focus in Splatoon 3. As we saw in the game's reveal trailer, the series' 4v4 Turf War mode is returning, this time with entirely new stages, moves, and weapons, including a brand-new bow that can fire ink arrows called the Stringer, and a melee weapon with a charged shot called the Splatana. It also appears some old specials are returning in Splatoon 3 after being cut from the series’ second installment. One character can be seen firing a modified Inkzooka, a special move from Splatoon 1, in the reveal trailer. Nintendo has confirmed new specials as well, like the Tacticooler that dispenses buff-providing beverages, the Wave Breaker that pulses and marks opponents, and the Reefslider that charges straight into enemies. You'll also have a few new moves in your arsenal, like the Squid Surge to burst up walls and the Squid Roll to pop out of the ink.

On top of the standard Ranked mode, post-launch updates will add a high-ranking X Battle mode, along with league battles. Large-scale paid DLC is also planned, though Nintendo has not shared details on what it will entail.

The multiplayer will launch with 12 maps, and more are said to be coming in free post-launch updates. You can familiarize yourself by testing weapons in a Test Range, explore maps in Recon Mode, and review highlights of matches.

Splatoon has always been about that drip, and Splatoon 3 is no exception. You can unlock new fashion options including headgear, clothing, and shoes from various vendors. That equipment comes with passive boosts to certain abilities, and you can swap out abilities using a particular NPC if you just like a certain look. Every three months for two years post-launch, the game will get a free catalog update with new customization options.

Aside from your personal style, you can also customize your locker with accessories and your favorite fashions, which will serve as the way you view recent opponents and friends. Mailboxes littered throughout the city will let you submit drawings, and you can snap selfies of your Squid Kid with a photo mode.

Do I need Nintendo Switch Online to play Splatoon 3?

Like Splatoon 2, you'll need to have a Nintendo Switch Online subscription in order to play Splatoon 3 online. Individual memberships cost $4 for one month, $8 for three months, and $20 for one year, while an annual family plan runs for $35 and covers up to eight Nintendo Accounts across multiple systems. Nintendo has also recently added a Switch Online "Expansion Pass" tier, which includes some bonuses like the Genesis and N64 classic catalogs, along with an included expansion for Animal Crossing: New Horizons. Nintendo has not outlined whether it will be regularly adding game DLC as a Switch Online Expansion Pass perk, but if so, we may see some bonuses included for Splatoon 3. It has already added Splatoon 2's story DLC as a bonus.

Three new Amiibo figures are coming along with Splatoon 3. Those will include a blue Octoling, a yellow Inkling, and a Smallfry, each for $16. Those are coming after the game launches, sometime this holiday. They all have the same basic functionality, though, as they can save your gear loadouts, unlock special gear, and store your in-game photos.

Splatoon 3 is up for preorder at Best Buy, Amazon, GameStop, Target, Walmart, and the Nintendo eshop. Thus far, there haven't been any preorder bonuses announced, though this could certainly change closer to its release date. In addition, a special Splatoon 3 Switch is coming on August 26--just in time for the special Splatfest event. That special Switch includes a special ink-splattered paint job on the dock and Joy-Con controllers. 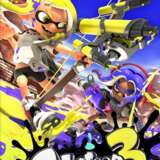