Whether they're putting you in charge of your own railroad, cruise ship, amusement park, or shopping mall, "tycoon" games have proven themselves to be consistently popular over the years. They are so popular, in fact, that you'll soon be able to run your own space station in Space Station Tycoon for the Nintendo Wii, which we were lucky enough to get our hands on at Namco's recent press event in San Francisco.

Unlike many build-your-own-whatever games, Space Station Tycoon has a bit of a story to it. You control a young man with named Shawn who just happens to have his own space station--at least until pirates attack it and blow it up. An entrepreneur hooks Shawn up with another space station, but then that one gets eaten by some sort of space whale. Later in the game, Shawn has his money stolen from his evil twin brother Nash. We had limited time with the game, so it was a little hard to follow the story, but that's the gist we got from what we saw.

The first thing you'll notice when you see Space Station Tycoon in action is that it looks a lot like Outpost Kaloki X, a space station-building game released on the Xbox Live Marketplace in late 2005. The visuals are very cartoonlike, and there are lots of vibrant colors. But the visuals aren't where the similarities end because the game plays much like Kaloki X as well. You start out with a small piece of real estate floating in space, and you're given a series of objectives to meet before time runs out. The first of Tycoon's 40 levels is a virtual reality-training simulation that puts you through the basics of creating your own bustling space port. There are meters on the bottom left side of the screen that show demand for services, such as health, trade, entertainment, industry, electricity, and more. When you see there's demand for something, you select the build option by using the Wii Remote to point to an open slot on your space station. If there's demand for entertainment, you can build a bowling alley, ice rink, or a karaoke center. Yoga centers or aroma massage parlors will satisfy your customers' health needs, and if it's trade you need, a flea market or importer can fit the bill. Most structures have varying levels that are capable of satisfying greater demand, and you get boosts to your structures when you build like items next to each other. So, you'll have plenty of strategies and options to consider when it comes time to build.

Of course, you can't just plop any old structure whenever you please. First, you'll have to have the money for the building and enough power to run it. If you're in need of more electricity, you can build a power plant. It not only costs money to build and power an ice rink or flea market, but it also costs money to maintain them. As a result, it's important to ensure that there's actually demand for what you're building or you'll quickly find yourself broke, and if that happens, the game is over. Thankfully, you don't have to rely only on meters to determine what you need to build; you can click on any of the spacecraft flying about the screen to find out how its inhabitants feel about your efforts. Or you can simply look at the icon above them that displays their mood and needs. You'll also be able to point at them with the Wii Remote, grab them, and then fling them up against your space station, blowing them up in the process. Believe it or not, there's at least one mission where this is encouraged. Yes, this game seems to have a sense of humor.

While we ended up running out of cash in our initial endeavor, our brief time with the game was enjoyable. Wii owners looking for a little something different will be able to pick up Space Station Tycoon in late August. 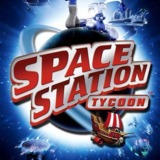