An impressive trailer of the ambitious game was shown, showing both exploration and space combat in the game's universe. Hello Games, a four-person development team, said the game was being developed for next-gen, but did not mention specific platforms.

Planets have their own ecology and ecosystems. Everyone is playing in the same universe, and Murray said that there would also be persistent features.

Murray also added that the series' previous work with Joe Danger was a stepping stone for development for No Man's Sky. 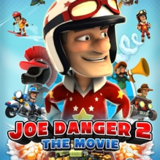