While full-motion video games are best remembered now as an ill-fated gameplay concept from the days of the Sega CD, the idea didn't always seem so doomed. When Dragon's Lair first burst into the arcades in 1983, the game's Don Bluth animation blew other games' graphics out of the water.

The game quickly grew in popularity, and spun off a sequel in Dragon's Lair II: Time Warp, as well as a sci-fi counterpart in Space Ace. Now Conspiracy Entertainment Europe has announced its plans to bring all three games to the Nintendo DS. The DS port of the original Dragon's Lair was originally announced earlier this year, but Conspiracy today narrowed its release window to the first quarter of 2008. All three games are being developed by United Coders.

When it is released, Dragon's Lair will include two play modes for players: a 1983 arcade mode faithful to the original game, and a Director's Cut promising "new and unique gameplay options," as well as support for the DS touch screen and Rumble Pak, and also voice recognition through the system's microphone.

Conspiracy is promising that the first arcade-accurate handheld version of the game will include all the game's levels and death scenes, but it is not the first time the arcade's full-motion video style of play has been attempted on a handheld. A mobile version was released in 2005, and the Game Boy Color played host to a solid port of the game back in 2001. 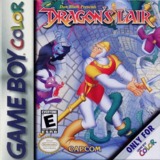