[UPDATE] Microsoft issues a statement on the matter.

[UPDATE] Microsoft issued a statement to GameSpot on the matter this afternoon; you can read it in full below.

“Microsoft often acquires various trademarks as part of its ongoing business strategy, but beyond that we have no comment."

Microsoft has filed a trademark application for a new game called "Screamride." The trademark application, filed April 9 with the United States Patent & Trademark Office, doesn't say much about the game other than that it will be an "online computer game," presumably for Xbox.

Of course, filing a trademark applicationn does not necessarily mean any such game is actually in development. We have reached out to Microsoft for comment.

Microsoft has been busy filing trademark applications for unannounced games of late. Earlier this month, the Xbox maker filed an application for a game called "Snap Attack," and in March, the company registered a new title called "Secrets and Treasure." 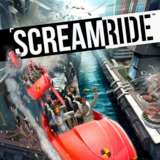