We take a moment to honor and look back at the legacy that Max Mathews has left with the video game audio community in this special edition of Sound Byte.

When the topic of video game music comes up, gamers and even non-gamers have a tendency to think back on the classic melodies from Super Mario Bros., Tetris, or Final Fantasy. These catchy 8-bit tunes left a lasting impression, especially for anyone lucky enough to grow up during the era of big hair and leg warmers. Older games like the iconic Pac-Man and Pong have also made their mark in the audio realm of video games, but digital music and sound go back even further than the 1970s. 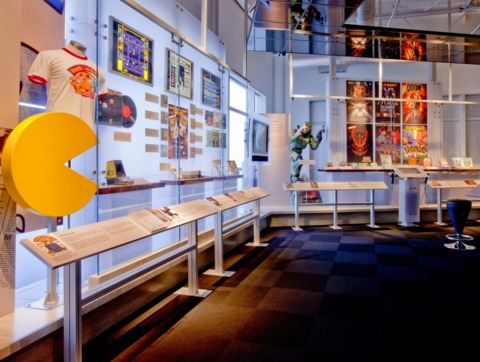 It was 1957 when Max Mathews wrote MUSIC, one of the first computer programs written to make music (or sound) on a digital computer and was widely used in the music research community. Mathews' program spawned multiple descendants including current programs such as Csound, Cmix and MAX--named after Mathews himself--that video game composers such as Akira Yamaoka (Silent Hill, Shadows of the Damned) have used. In the 1970s Mathews developed Groove, a system used to create and manipulate music, and it was the first computer system designed for live performance.

"Mathew's visionary work in computer music was the forerunner of modern digital audio sequencing and reverberates into the future of cutting-edge new developments in real-time music composition," said Adam Levenson, executive director of OmniMedia Music who has managed multiple audio and talent groups at Activision.

His work didn't end there. Mathews' interest in live performance and what a computer could do to help a performer led him to invent the radio-baton and the conductor program, a controller and program used for conducting MIDI music files. This device helped pave the way for motion controllers that were eventually developed by Nintendo, Sony, and Microsoft. To see a demonstration, click for the video here.

Computers have come a long way since Mathews first began his work in the 1950s at Bell Labs. At the time, computers were so weak that there was no possible way for the machine to play music in real time because it would take several seconds to generate a second of sound. Now, it's entirely possible to create an orchestra in real time on a laptop.

According to his eldest son, Vernon Mathews, working in digital music was by accident. He was originally set to work for Honeywell after graduating from MIT, but by chance he met with someone who would ultimately lead him to Bell Labs, where he would be able to pursue his research in digitizing sound and lay out the groundwork for the tools that exist now.

"He was an amateur musician. He was basically given a job assignment which snowballed into his interest in digital music. It was often just a hobby," Vernon said. "Once he was established and once he had this interested, he worked at it tirelessly."

At the time when Mathews was hired at Bell Labs, his son said that it was an environment that encouraged research and development of technology and that Mathews wanted to have his work be public domain.

"He wanted his work developed," said Vernon. "He nurtured a lot of musicians and tried to get them interested in composing with his tools. What he did with the radio-baton, certainly in someone else's hands [would have] turned into a lot of patent royalties, but Max was just interested in people having the tools to manipulate music and expand the musical frontiers."

An avid violinist who enjoyed Mozart, Beethoven, and Haydn, Mathews continued his work for decades to come, collaborating with composers and other scientists. After leaving Bell, he continued his research at the Center for Computer Research in Music and Acoustics (CCRMA) at Stanford University.

"He never became irrelevant," said his son. "Everybody was always seeking him out. He didn't want to flush it all out himself. He wanted people to develop [his work] so he always had students around him and was always looking for somebody, for the ultimate composer that would really make electronic music listenable."

Chris Chafe, the director of the CCRMA, was a friend and colleague of Mathews and together they worked on various projects over the years. Not only did they play music together--with Mathews on the violin and Chafe on the cello--but Chafe continues to use a prototype bridge pickup that Mathews designed for him in 1988 for his hand-made cello. 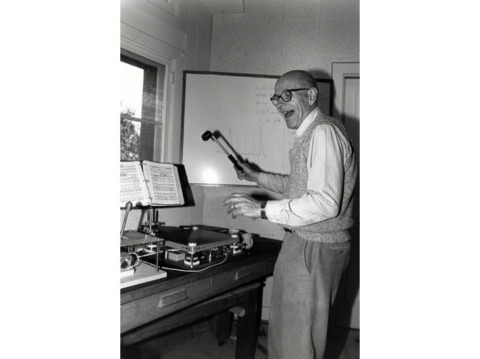 Max Mathews and the Radio-Baton.

"He made the electronics for it, a prototype. That's the quality of engineer this guy was. A prototype in 1988, and I'm still carting it around onstage," said Chafe. "Everything he did was that kind of engineering finesse. [He] built stuff that lasted."

Chafe did note that not one person does everything, but he pointed out that Mathews was the right person to instigate and inspire others and ultimately planted the seed of an entire medium back in the late 1950s.

"We're all very lucky it was Max," said Chafe. "Friendly guy, always a smile and very approachable. He's always in contact with people from all over the world, a real people person. He had a real quality of appreciation. It was neat to see some things through his eyes and you learn what he appreciated."

Mathews may not have actively been a part of the video game music community, but his extensive research and inspiring work has evolved into a medium that game composers, sound designers, and audio engineers can take advantage of.

And they do. Boris Salchow, the composer for Resistance 3, called Mathews "a tireless optimist and visionary whose inventions not only led to collaborations with Cage, Varese, and Boulez, but who laid the groundwork for many of the most interesting and cutting-edge music software products that were created recently since music production itself has moved into the digital realm."

Even though Mathews' work was always meant for the public and meant to be evolved by others, his ideas and inventions have made a mark in audio history and will continue to live on as the industry grows.

"For computer audio and music, Max was the combination of Thomas Edison, Alexander Graham Bell, and Albert Einstein," said Rod Abernethy, the composer for the upcoming game Rage by id Software. "There will never be another like him. Max was at the right place at the right time in history, the true 'inventor' of computer audio. Anyone creating digital music--past, present, and future--owes Max Mathews big time."

Max Mathews was born on November 13, 1926, in Columbus, Nebraska, and passed away April 21, 2011, in San Francisco. A memorial event is planned in honor of Mathews on Sunday, May 29, at CCRMA, located at The Knoll Building, 660 Lomita Dr., Stanford, CA 94305, beginning at 5:00 p.m. All are welcome, and his son Vernon suggests bringing ear plugs. For more details on the event, please visit the CCRMA web site. For information regarding Max Mathews' work and the history of computer audio, please visit the Computer History Museum.