We let you audiophiles in on a musical sample of the upcoming PlayStation Vita game.

With the PlayStation Vita on its way to North American and European shores soon, gamers will get to check out not only big triple-A titles like Uncharted: Golden Abyss, but also indie fare like Tales From Space: Mutant Blobs Attack. The latter title is a 2D side-scroller where players control an ever-growing mutant blob as it navigates and terrorises everything in its path.

To fit with the game's sci-fi '50s theme, developer Drinkbox Studios used the talents of musician Shaun "MegaShaun" Hatton and composer Peter Chapman to create music for the genre.

Hatton has a background in music involving the use of synths, percussion, and comedic lyrics. According to DrinkBox's Graham Smith, the song "Mutant Blobs Attack" is focused on the human side of the monster-invading events in the game. The song describes the feelings of a scientist as he watches the blob destroy the city with a mix of percussion and '50s-esque synth.

Of course, a game's OST cannot survive with just an ending credit's music alone, so Peter Chapman is there to add colour to the already visually diverse title. His past video game music credentials include Mod Nation Racers and About a Blob; other non-video game contributions include composing the soundtrack for the TV series Bomb Girls.

His compositions for the game follow the '50s vibe that DrinkBox Studios was going for, and it shows in tracks like "The Lab" and "Big City."

Check out the upcoming game and its music when it's out for the PlayStation Vita in 2012. Avid listeners can also preview MegaShaun's musical contributions at this link. 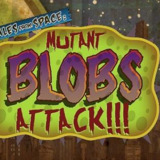