We talk to a couple of musicians responsible for crafting the soundtrack to Cole MacGrath's journey.

Comic-Con is happening this week, and while we will most likely be bombarded with bright costumes and plenty of spandex, not all superheroes or villains don a flowing cape or ridiculously hard-to-run-in boots. Infamous 2's Cole MacGrath was a bike courier who just happened to be at the wrong place at the wrong time. Or was it the right place at the right time? Either way, he has superpowers and can zap people, so it could have been worse. A team of composers--including Bryan "Brain" Mantia, former drummer for Guns N' Roses, and Stanton Moore of Galactic--had to come up with the right tone and setting for this modern-day adventure. Get to know the composers in the following email interview (busy schedules don't always allow for a nice sit-down camera interview), where we talk about how they got into composing for video games and what it was like working on Infamous 2. We have some music clips from Infamous 2 for you to check out as well and follow @gs_soundbyte on Twitter for a chance to win the soundtrack! For even more Infamous 2 music and for tunes from other video games, be sure to head on over to Sound Byte Radio.
Infamous 2 - Swamp Blockade

Bryan Mantia: I am Brain. I like to think of my musical background as more of a "movement" so to speak. The evolution of a drummer into a composer…. Metamorphosis… Emotional, spiritual, and visceral… Real life. I began drumming in high school (egg stage). The drums and I had respect for one another and worked together for many years to establish an understanding (larva stage). This resulted in my having a desire for higher learning, attending college to hopefully become one with the drums (pupa stage). Later on down the path I had the good fortune of playing in bands like Primus, Guns n' Roses, and for Tom Waits (adult stage). Now, having gone into composing, I like to think of the current state of my life as "backstage."

BM: The first instrument I picked up was violin. I had an affinity for Paganini, which quickly turned into a hatred.

BM: I wish I knew how to play the hammer dulcimer. This instrument would give me the perfect marriage between what I do and what I feel.

BM: My fondest musical memory is blowing into a straw at McDonald's, hearing the pitch, and wondering if I had just played middle C while I ate my Big Mac.

BM: I got into video game composing by talking to the heavies about how I would like to join their club. They liked my shoes, so I got asked back for a second meeting.

GS: What was it like working with a team of musicians and collaborating on this project? Do you prefer to work alone?

BM: The group of musicians I worked with on Infamous 2 were top-notch. If I were to be given the choice to work with them or work alone, I would pick them. But if it were anyone else, I would need a really good reason to share my creative vulnerability.

GS: How did you approach the music for Infamous 2?

BM: Describing the approach to my Infamous 2 composing is simple: keep my body nourished, never say no to good ideas, and make Jonathan Mayer say the word "awesome." In all seriousness, my compositional approach was to match the vibe of the game with the music as much as possible, adding an emotional undercurrent whenever appropriate. I used a lot of live instruments (many nonconventional like pieces of junk, metal, trash cans recorded in odd places). I found what really worked was an overall aggressive and bent sound with little beautiful and simple melodies woven throughout.

GS: Did it turn out how you wanted it to?

BM: It absolutely turned out how I had hoped it would. Ballsy, captivating, and tenacious.

GS: What is your process when composing for a particular track?

BM: My process is usually to figure out what I want to say with the piece (in the simplest way possible), then hang all my bells and whistles on top of that strong main message. That main message may be a rhythm that captures the essence of a particular district or a melody that gives the player some insight on how Cole might be feeling. It usually takes a bit of trial and error, but once I arrived on the right path, it would be clear immediately.

GS: How has your percussionist background helped you with composing?

BM: My percussion background has helped in that I was able to instruct members of my own writing team to play different rhythms on their respective instruments that they normally wouldn't have.

BM: I see bright things in the future for video game music. I think it will soon be recognized as one of the biggest ways people are exposed to new music.

BM: I give Jim Dooley the award for biggest neckerchief ever to be worn at Skywalker, and for that I admire him. I also admire Tim Davies for his mysterious accent and charming smile.

GS: What projects are you currently working on?

BM: Currently I am working on a number of projects, most notably on scoring a film (with my writing partner Melissa Reese) called Detention. It is directed by music video heavy Joseph Kahn and stars Dane Cook and Josh Hutcherson. I am also preparing to run a marathon.

GS: Do you have any advice for aspiring musicians and composers?

BM: My main advice for aspiring musicians and composers is: make music from the heart, and the rest will come.

SM: Going to Mardi Gras parades with my mom and seeing the drums in the marching bands.

SM: We were contacted, I believe because the new city, New Marais, was to be based off of New Orleans. I think Jonathan Mayer and the crew felt we could add a New Orleans vibe while being experimental at the same time.

GS: What was it like working with a team of musicians and collaborating on this project? Do you prefer to work alone?

SM: The collaborative spirit on this project was enjoyable for us. The Sony guys would bring in pieces and ideas, and we would improvise to them, and they would mix the pieces later. We also composed about 65 minutes of music, and they would cut that up and use it for their purposes as well. It was a very fun process, and it's exciting to see the end result.

GS: How did you approach the music for Infamous 2?

SM: I used the opportunity to set up lots of different instruments that I have been collecting over the years. I had some Nayhabinghi drums from Jamaica, and I set up one of the bigger ones on a cradle as a bass drum. I set up several Remo Mondo snares, which have simulated calf heads. I set up a 10, 12, and 14 as a snare and toms. I also used a lot of LP micro snares and drum set timbales and used a lot of Pete Englehart percussion and bells as well. We came to affectionately call this the "Bizarro Kit." I played a lot of grooves that I have come to develop over the years, but they all sounded different on this kit. This led to lots of other ideas as well. It was a very creative process. This process then led to lots of grooves that I was able to use for the current Galactic record that we were recording at the same time as some of the Infamous 2 sessions. It's been a very liberating experience and has opened up a lot of creativity in some of the things that I do in the studio now.

GS: Did it turn out how you wanted it to?

GS: What is your process when composing for a particular track?

SM: We were encouraged to be really experimental, so we improvised a ton, and the music and development teams used what they thought fit what they were looking for.

GS: How has your percussionist background helped you with composing?

SM: It's allowed me to experiment with different sounds and tones and vibes and moods that I can apply to the compositions.

GS: What projects are you currently working on?

GS: Do you have any advice for aspiring musicians and composers? 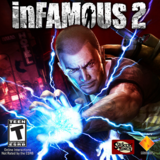