Return of the king.

I did something in Sorcerer King I’ve never done before, at least not so directly: I killed thousands of my own people to stop an impending apocalypse. I can think of a few cases in which I’ve had to sacrifice lives to succeed, but this was an active choice. I didn’t simply let my citizens perish; I straight-up killed them. It was a cold, albeit necessary choice.

To reach such a point of no return, you must first become acquainted with this turn-based strategy game’s rules of engagement. You marshal your own high-fantasy forces, build up one of the last human civilizations, and do everything in your power to stop an evil demigod. Sorcerer King resembles games like Heroes of Might & Magic in that you maintain several cities that produce soldiers, construct buildings or improvements, and harvest resources to streamline your medieval industry. Turn by turn, your soldiers spread across the land, finding arms, armor, and artifacts that modify their combat abilities. Some creatures even carry rare materials that can be crafted into powerful weapons or potions. It all depends on what you find, and how you react to the situations with which you're presented.

In one encounter, I came upon some undead soldiers who were looting an ancient tomb. I chased down the responsible necromancer and then hypnotized him, gaining an exceptionally valuable battle mage in the process. These examples are abundant and offer countless opportunities to the bold. You are like Middle-earth’s Aragorn in these moments, assessing and adapting to increasingly precarious circumstances, struggling to turn the odds to your favor. One of Sorcerer King's biggest planned features will help complete that illusion, adding minor factions that can be courted in the hope that they might aid your crusade.

Sorcerer King leans on a tactical battle system, in which for each encounter you take direct control of soldiers and maneuver them about. Each of these fights starts with units close to the front lines, meaning you can often get in at least one solid attack on the first turn. That's important, as it keeps the pace up and helps prevent you from having time to dread the encounters. There's an auto-resolve button that you can use if you really don't want to take the time to mess with the fight, but battles are usually over in less than a minute, and jumping into the tactical side of things can, and often does, yield superior results, in no small part due to your access to some high-powered spells.

No fantasy setting would really be complete without some form of magic or mysticism, and for Sorcerer King, that often comes in the form of global spells that draw from your mana pool. Mana, in this instance, is something of an economic resource. Your cities can produce it continuously, and there are some structures that will provide a steady stream of mana, which you can then focus into learning new spells or skills, building up a pool of learned spells that you can draw on in combat. Most potential leader choices aren't currently available, so to begin with you only have access to a relatively aggressive warlock who favors spells that deal direct damage to foes. These spells can often shift a particularly crucial battle, such as the capture or defense of an important city. It was actually my limited mana pool that led me to kill off so many of my own citizens. Some way into the game, I learned a spell called "Sacrifice." With it, you can halve a city's population and convert those people directly into mana. I used them to heal the last few troops in my army, launched a final assault on the Sorcerer King, and stopped the apocalypse.

It was my first game of Sorcerer King, and since I was unfamiliar with the rules (there's no decent tutorial yet), I was at a hefty disadvantage. I'd let the doomsday counter fill up a bit too much, and I was out of options. So I dumped all that additional mana into healing my troops and giving them what buffs I could so that I could take on the Sorcerer King directly. The gamble worked, and while I felt bad about the sacrifice, this turn of events was one of the more melodramatic examples of the game's excellence.

More so than most strategy games, Sorcerer King is about asymmetry and how you choose to cope with it. You'll never be overwhelmingly more powerful than your foe because you simply don't have enough time to build up the resources and the forces to be. Instead, you'll be forced to manage your risk, seeking not supremacy but mere survival. For that reason, the game comes off as delightfully fresh. 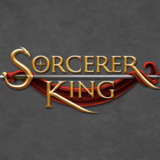