Sony unveiled the next evolution of the DualShock controller for the recently announced PlayStation 4.

The two most notable features of the DualShock 4 are its touch screen and share button, which will enable players to capture and share gameplay clips with friends and the gaming community at large. According to Sony, the share button will allow players to broadcast their gameplay in real-time to friends through internet streaming services such as Ustream. Players can also upload video gameplay to Facebook.

The new DualShock 4 controller will incorporate a new six-axis sensor as well as a light bar with three color LEDs that illuminate to match the color of characters in a game to offer a way for players to identify other players. According to Sony, the light bar also changes patterns during gameplay to provide information to gamers, such as when a character is critically low on health or has taken damage. 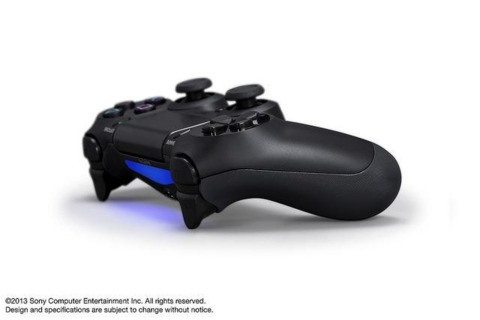 The controller also comes with a built-in speaker and stereo headset jack. This, combined with the Mono Headset that will be bundled with PS4, will give gamers the chance to chat with friends playing online, while hearing sound effects from the controller.

Sony briefly noted that the rumble functionality has been upgraded, but offered no additional details during his presentation.

The publisher also offered details about the new PlayStation Eye camera for the PS4. According to Sony, the new camera incorporates two high-sensitive cameras that have wide-angle lenses with 85-degree diagonal angle views, which enables it to cut out the image of player from background, or to grasp player's position in front and behind.

Sony says players will be able to log in to their PS4 with face recognition and will be capable of using their own body movements in games more intuitively. The camera can also reportedly sense the light bar on the DualShock 4 controller to judge the positions of multiple players, and set characters in the same positions or let a character talk to a particular player. The camera will also support the PlayStation Move controller, detecting the motion with more accuracy and reflecting players' in-game motion.

Stay tuned to GameSpot for more PlayStation 4 announcements as they become available.

There are 397 comments about this story
Load Comments (397)