With Polyphony Digital's Gran Turismo 5 Prologue quickly approaching its April 17 North American release exclusively on the PlayStation 3, Sony has kicked up promotion of the street racing title into hyperdrive. Earlier this month, the publisher revealed a roster of more than 70 vehicles slated to appear in the game, as well as six racing tracks that all feature alternate routes. Today, Sony laid down tracks of another kind, revealing the full list of musical acts appearing in the game.

To headline GT5 Prologue's soundtrack, Sony has commissioned two exclusive remixes for Weezer's "Automatic" and Mars Volta's "Goliath." Other acts slated to appear in the North American version of the game include DJ Shadow's remix of Jimi Hendrix's "Love Love," Justice's "Let There Be Light," and Thin Lizzy's "The Rocker (Richard Evans Mix)." Sony has also signed on a number of international artists, including Nittoku Inoue, naomee, and Goose.

Out in Japan since December and set for release this week in Europe, Gran Turismo 5 Prologue will be available in North America next month as both a digital download through the PlayStation Network or at brick-and-mortar retailers for $39.99. For more on the game, check out GameSpot's previous coverage. 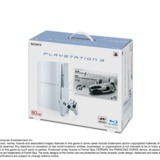