A new page is up on Sony's official Japanese PlayStation site to plug the company's upcoming PlayStation 2 action-puzzler, Mawaza. The site features a handful of screenshots, some character descriptions, and some gameplay footage that goes over the basic rules of the game.

Mawaza sees players take control of a character on levels populated by a number of floating spheres. Players create shapes in triangular segments by running between the spheres, and clear levels by swinging these shapes into one another in increasingly elaborate combos that open the path to complete each level.

Developed by Media Vision (of Wild Arms fame and Sneakers infamy), Mawaza is due in Japanese stores in October, with no word on a North American release as of yet. 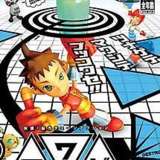