The classic rhythm game launches in North America for the first time tomorrow.

The biggest topic of conversation for some following Sony's E3 press conference in June was not PS4, Bloodborne, GTA V, or anything else along those lines. Instead, it was the mention of a nearly 15-year-old game PlayStation game that had never even been released in North America: Vib Ribbon. Now, thanks to the outpouring of discussion generated by that reference, the game is being released in North America for the first time tomorrow through the PlayStation Network.

The news was announced on the PlayStation Blog today by SCEA president Shawn Layden, the man who mentioned Vib Ribbon back in June. The game will be available on PS3 and Vita beginning tomorrow. A price was not mentioned, but Layden said it would be "attractive to both Vibri virgins and the rare few amongst you who found a way to experience the Singing Spline back in the day."

Some may be disappointed over the lack of PS4 support, but that doesn't come as a surprise given that PS1 games are (inexplicably) not playable on the system presently. However, Layden did say Sony is "working on a way to make it available on PS4," which is encouraging news.

Vib Ribbon is a rhythm game made by Japanese studio NanaOn-Sha, the same developer responsible for effectively inventing rhythm games with the likes of PaRappa the Rapper and Umjammer Lammy. In addition to playing with songs on the game's soundtrack, you could import music from CDs you had--a feature that will return if you play the game on PS3.

Layden recalled working at SCEE and attempting to bring the game from Japan to Europe and encountering resistance from Sony's marketing department. The game was ultimately released there in 2000, almost a year after it came out in Japan. "Sure, it didn’t go platinum and it didn't make a ton of money," Layden said. "But it did show, again, that PlayStation is the place where everything innovative, challenging, new, and somewhat off-course can come to find a fan, a market, and a home."

Discussing his mention of it during E3, he said, "It was not my intention to rub salt in the Vib Ribbon wound, but to express my admiration for it as the genre-busting title it is and was. My mistake was that I had assumed that everyone who had been around in the original PlayStation era would have had their chance to play the game. I had forgotten that the American gamer was effectively denied the opportunity. To mention it at E3 was to delight some and to squirt lemon in the eyes of others. For this, I apologize."

Fortunately, it was the response from members of the media and gamers to his mention of the game that prompted tomorrow's re-release. "Vib Ribbon is finally making its way to North America, and the major catalyst was all of you who wrote, posted, blogged, tweeted that you wished to see this game come back and wanted your voice to be heard by the suits," Layden said. The blog post includes the image you see above, which features a collection of tweets lamenting the lack of an announcement to coincide with the seemingly purposeless Vib Ribbon E3 tease. 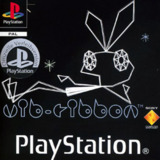