Sony refuses to sell Super Seducer on the day it was due to launch.

Super Seducer, a game that bills itself as the "world's most realistic seduction simulator," has been blocked from sale on PlayStation 4. The game launched today on PC and was planned for PS4 as well, but Sony confirmed to Motherboard that it will not offer the title on its digital store.

The company apparently offered no explanation as to why it won't sell the game, but the announcement comes in the wake of criticism about it. The game features real video of "seduction guru" Richard La Ruina, who gives players advice about how to speak to women in places like coffee shops, offices, and bars. The women are also shown via video.

"My comment is that I have no comment on this," La Ruina told Motherboard about Sony's decision to block the game from sale on the PlayStation Store.

Super Seducer launched on Steam today for $10. In addition to the base game, it offers add-on packs like "Earning the Kiss" and "Nighttime Strategy" for $4 each. The game has a "Very Positive" aggregate review score on Steam, though it only stems from 53 reviews. Many user reviews are overwhelmingly negative, calling out the game for being sleazy or worse.

La Ruina defended his game in an interview with PlayStation Lifestyle earlier this year.

"This is not a dumb FMV game," La Ruina said. "It's something that has a lot of thought going into it. We were careful to make sure that the women are all strong in it. [We made sure that] I get severely dealt with when I’m behaving incorrectly. I think that it's a lot deeper. It's easy to dismiss when you see pickup artist and then FMV, but it's a lot deeper and smarter than you might get."

We will report back with more details on this story as they become available. 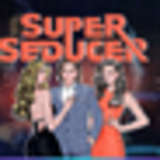 Super Seducer: How to Talk to Girls
PC
PlayStation 4