Two times the Sonic on Nintendo's two screens. We take an exclusive look at Sonic Rush.

The Sonic the Hedgehog series has gone all over the place since games went 3D. Sonic Adventure sort of took the game away from its high-speed roots, though Sonic Heroes certainly delivered its own take on Sonic's fast-moving antics. But still, there's something to be said for the classics. Sonic Rush appears to be on that classic track, delivering the high-speed side-scrolling 2D that the early games in the series is known for. But by taking advantage of the Nintendo DS's dual screens, Sonic Rush is definitely a new spin on an old favorite.

Sonic Rush puts you in the roles of Sonic the Hedgehog and Blaze the Cat as they run real fast and attempt to recover the sol emeralds. Blaze isn't playable in the short demo being shown at E3, but she'll have her own separate adventure that, of course, often crosses paths with Sonic's.

The E3 demo of Sonic Rush contains one level and one boss fight. The level is designed with the same sort of grassy, hilly terrain you've come to expect from the first world of a Sonic game. The gameplay hasn't changed all that much, so you're still running as fast as you possibly can, occasionally rolling up into a ball to jack up your enemies by either blasting right through them or jumping on their heads. The game lets you bust out a double jump by hitting the right trigger when in midair, which lets you clear longer gaps. You can also execute the standard Sonic spindash by holding down and hitting the jump button. Another new feature is a meter that lives on the left side of the screen. When it's full, you can activate a rush mode that effectively makes you unstoppable for a brief period of time.

The game uses the two screens of the DS to give you a taller view of the action. You'll be jumping up to get to platforms on the upper screen and falling down to move down below numerous times in each level. This is a pretty cool use of the screens, which really makes the game feel larger and more frantic. The boss fight we saw in the brief demo at E3 takes place on one screen, and it takes on a more polygonal look. Sonic is limited to a small platform in this fight, which pits him against a large, hammerheaded snakelike creature. The polygonal snake moves around in the background, sizing you up for his eventual attack, which is an attempt to crush poor Sonic with his big hammerhead. It's your job to get the heck out of the way and then jump on top of the head to damage the boss. When you do this three times, the game cuts to some quick alternate camera angles of the final strike. The whole game has a pretty cool look to it and makes good use of polygons in both the Sonic player model and the boss character.

In addition, the game doesn't seem to use the touch screen at all, but we wouldn't be surprised if the final version of the game ended up including some sort of stylus support. That final version is currently scheduled to be available for the Nintendo DS this fall. 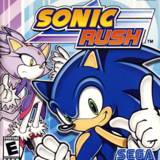