Does Sonic Forces break the series' streak or reinforce its stereotypes?

2017 has been a big year for Sega's iconic mascot, Sonic. The blue blur starred in two major releases this year, the first of which, Sonic Mania, garnered widespread acclaim from fans and critics for the way it successfully recaptured Sonic's glory days. Sega followed it this month with Sonic Forces, a new 3D installment that blends classic and modern Sonic gameplay and gives players the ability to create their own Sonic characters.

Critics have now weighed in on Sonic's newest adventure, and the reception has been decidedly mixed. GameSpot awarded it a 5/10 in our Sonic Forces review, saying the game "falls short due to frustrating design choices and inconsistent level design."

Other reviews for Sonic Forces are available online as well, and as usual, we've rounded up a sample of them below. For a broader look at what critics are saying about the game, be sure to visit GameSpot sister site Metacritic.

"For years the Sonic series has come up short in its 3D games. It wasn't until Sonic Colors and Sonic Generations that the series was able to grasp a semblance of quality that could change the perception of the series as a whole for the better. Sonic Forces ultimately fails to advance the mechanics of previously successful 3D Sonic games, or present them in their best light. A mediocre platformer at best, Sonic Forces manages to do nothing more than reinforce long held stereotypes against Sega's beloved blue blur." -- Matt Espineli [Full review]

"On top of the joy of creating and playing as your own character, there's a lot of goofy charm that makes Sonic Forces hard to be too disappointed with. The graphics are colorful and engaging, and the music is a pumping backdrop for extreme team-ups, super-speed cinematics, and lots of ruminations on the power of friendship. There are some really fun levels in the mix, too, and surprisingly strong boss fights make for some unexpected highlights. But Sonic Forces doesn't build on its handful of good ideas as much as it should, and it screeches to a halt just as it seems to hit its stride." -- Heidi Kemps [Full review]

"Sonic Forces creators' good intentions and interesting ideas don't amount to much in a game so clumsy and limited in design. It certainly doesn't help that Forces follows right on the heels of Sonic Mania, a game that not only demonstrated a more focused design sensibility but also did a far better job of realizing its creators' ambitions. Forces may have had a larger budget than Mania, but it feels like the poorer creation all around. Unless your dearest dream has always been to play a Sonic game as your own original fan art character, Sonic Forces doesn't have much to offer." -- Jeremy Parish [Full review]

"Sonic Forces has one defense; that it's a great-looking, fan-serving, accessible Sonic for the hedgehog's younger audience. With Sonic Mania pitched as the Sonic for real gamers, that's all it needs to be. Well, that's not good enough. Sonic's younger fans deserve a game with more imagination and more chance to discover, learn and build their Sonic skills, and the Mario series shows it's possible to do this in a game that appeals to fans both young and old. Sonic Forces does not." -- Stuart Andrews [Full review]

"Despite my multiple gripes with Sonic Forces, I still enjoyed the adventure. 3D Sonic games still aren't to where they should be after such a long time of iteration and experimentation, but through improved gameplay and level design, Sonic Forces continues the series' evolution in the right direction." -- Brian Shea [Full review]

"Sonic Forces mashes together everything from Sonic's history, from 2D/3D mechanics to over-the-top action spectacle pieces. The new customizable hero feature breathes fresh life into the franchise, but the 3D gameplay it uses overpowers the game's attempt to combine what has made the different eras of Sonic work." -- Evan Slead [Full review] 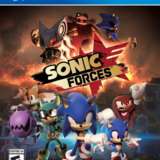