"It's a game that you can come back to. That's what I think has kept it alive," Avalanche founder Christofer Sundberg says.

Some Just Cause 2 players have played the game for more than 500 hours, Avalanche Studios founder and creative director Christofer Sundberg has revealed in a new interview. The reason the game has stayed so popular (it has more than 500,000 users per month) years after its launch in 2010 is because there is always something new to do or try, Sundberg said.

"It's a massive playground. It's one of those games that ... if you'd like to play a game for half an hour, you can play Just Cause. Just jump in a car and crash into a wall and grapple a helicopter and fly somewhere," Sundberg told Polygon. "Blow up a 200-meter-tall radar tower. All of a sudden you have 30 minutes of action experience and now it's time for dinner, so you shut it off. Two months later you can do the same thing. That's what I think has kept it alive. It's a game that you can come back to. You don't have to play it over a long period of time, even though people do. We have some players who've played the game for 500 hours."

Just Cause 2 has sold "slowly" since launch, Sundberg said, and more than 6 million people have now played the game. The PC version sees around 3,000 new players per week, thanks to mods like the Avalanche-approved multiplayer mod, Sundberg said.

Given the strong sales and critical reception for Just Cause 2, a third entry in the series seems likely. Avalanche's office in New York City is currently working on a new AAA title to be published by Square Enix (publisher of the first two installments), which is rumored to be Just Cause 3.

"It's a huge franchise for the studio, so you shouldn't be surprised if there is a Just Cause game in the future, but right now it's nothing we can talk about," Sundberg said.

Whereas the Just Cause series was formerly one of the only major franchises priding itself in massive, open-world gameplay, various other games have come along since, including Far Cry 3, Watch Dogs, and The Crew, among others. But Sundberg isn't worried about the competition because he feels that Avalanche's games offer a level of player agency and freedom that others do not.

"Obviously we feel the pressure," Sundberg said. "But also, I think when I talk to publishers, and also developers, I get the sense that many of them aren't really prepared to give up that level of control that many games have over the player."

"In Just Cause, you play for a few missions, and then you have a 32 by 32 kilometer world to go anywhere at any time using any vehicle," he added. "I mean, there's a million ways that you can break the game. You can take a plane and just fly it out somewhere. You won't hit an invisible wall or anything. It's just that there are so many ways you can take away from the experience. That's why I think... I'm not worried about [the competition]."

Right now, Avalanche is focusing on open-world car-combat game Mad Max, which is coming to consoles and PC later this year published by Warner Bros. Sundberg said this game will be "much more mature" than Just Cause, but made clear that it still retains a certain level of "playfulness." 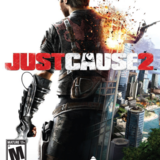