Two new Asheron's Call expansions will be first products from Station Publishing; new EverQuest expansion pack is due in March--with more to follow.

Less than a week after launching a new Station Access package, which includes subscriptions to all of Sony Online Entertainment's titles for $21.99, SOE revealed today that it has created Station Publishing, a new distribution label.

Throne of Destiny is the third installment in the Asheron's Call universe (the game first launched in November 1999). The expansion pack offers a graphics upgrade; a new playable race, the Viamontians; and a new high-level play system that rewards experienced players with skill credits. Legions is the first follow-up to Asheron's Call 2: Fallen Kings, and it provides players with a new storyline. The expansion provides gamers with a new playable race, the mystical Empyreans, a new continent shrouded in mystery, and a new hero system.

Also today, SOE revealed that a new Adventure Pack for EverQuest II is scheduled for digital release in March 2005 for $4.99. More additions are forthcoming, including purchasable biannual expansion packs and periodic story-driven Adventure Packs that add new content and gameplay elements to the world of Norrath.

"Today we're announcing a new content strategy for EverQuest II that presents online games in an entirely new manner, like that of a television series or serial movies," said John Smedley, president of Sony Online Entertainment.

The first Adventure Pack will focus on the dark elves of Neriak and some unsavory evil in the tombs below the surface of Norrath. The US version of the Adventure Pack will be made available to European players at the same time, first in English, with versions in other languages to follow.

Future Adventure Packs will feature new quests, zones, storylines, and story arcs that let players explore Norrath more deeply. Although players will have access to certain levels of the Adventure Packs, they will need to pay a fee for full access. Those who have subscribed to Station Access at least 60 days before the release of a given Adventure Pack will be able to access the full pack for free.

EverQuest II carries a monthly fee of $14.99 for continuous access to the gameworld. Players can subscribe using a credit card, or they can purchase 30-day and 90-day SOE game cards. 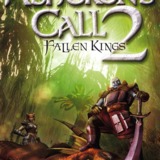