Sony stops by the GameSpot office to give us a sneak peek at a demo version of its upcoming tactical shooter.

If you're a fan of the SOCOM series, you know that with each installment developer Zipper Interactive has done a good job of improving existing features and adding new ones to the mix. When SOCOM 3 was released in October of last year, for example, it doubled the number of online players from 16 to 32 and added vehicles to the battlefield. SOCOM U.S. Navy SEALs: Combined Assault will retain all of its predecessor's multiplayer features (including its maps) and will add even more maps, weapons, and vehicles to the mix, along with some control tweaks and an all-new four-player cooperative campaign mode.

Rather than offering missions and storylines in three or four different areas of operation, Combined Assault will focus on a single campaign spanning some 18 missions. The narrative will purportedly be far more interesting than those in previous SOCOM games, and your progress through it--and through each individual mission, for that matter--will be far less linear. You'll be able to tackle mission objectives in any order you like, you'll occasionally get to choose which order to play missions in, and if you're also playing SOCOM U.S. Navy SEALs Fireteam Bravo 2 for the PlayStation Portable, your actions in one game will have an impact on the other when you connect the two.

The two aforementioned upcoming SOCOM games let you play through the same campaign from the perspectives of two squads working together. The example that we were given of how this will work took place during a mission titled Winterblade, in which one of your objectives on the PlayStation 2 will be to locate and destroy a crashed helicopter. We watched the SCEA representative playing the game and noticed that there were a handful of enemies guarding the crash site. We were then told that one of the PSP game's missions will task you with sniping said enemies from a distance and that if you've already done that when you find the chopper, you'll hear a radio message from the other squad informing you that it's safe to proceed.

Enemies in Combined Assault will, we're told, be much more intelligent than their counterparts in previous games and will act differently according to what type of weapon they're carrying. We were given several examples during our demo, but the gist is that enemies will attempt to attack you from the optimum range for their weapon and will assume prone positions and such as appropriate. SCEA also told us that enemies will respond realistically if they realize that one of their colleagues has been killed or is under fire, so stealth and the use of suppressed weapons will be more important than ever. New to Combined Assault will be nonlethal ammo types such as rubber bullets and beanbags, but we didn't get to see any of these in action.

A couple of new features that we did get to see in action during our demo were the medikit, which can be used to restore health at any time during a mission if you're carrying one, and the new team command action (TCA) system. In SOCOM 3, the team command menu (TCM) let you issue orders to your squad quite easily, but it wasn't streamlined enough to be practical during the middle of a firefight. The new TCA system, which works in tandem with the TCM, uses a context-sensitive cursor that lets you give the most common orders in a fraction of the time. If you move the cursor over a door, for example, you might get an option to breach it, while hovering over an enemy will default to an option ordering your squad to attack.

We look forward to bringing you more information on SOCOM U.S. Navy SEALs: Combined Assault as soon as it becomes available. 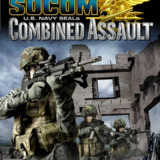