Sources close to the development of Eidos' upcoming tactical shooter confirm that it started out as a Deus Ex game.

At E3 last month, Eidos showed off a new game that, in some respects, seemed awfully familiar. Called Snowblind, the tactical first-person shooter contained elements that seemed plucked right out of the Deus Ex series. It followed a special-ops commando equipped with high-tech weapons and ability-bio-modifications that gave him superhuman powers. Although Snowblind's squad-based tactical gameplay was new, its setting--a war fought in a sprawling urban wasteland with robots and cyborgs--had a futuristic sheen reminiscent of Ion Storm's action role-playing game.

As it turns out, the similarities between Snowblind and Deus Ex are no coincidence. Sources close to the game's development confirmed today that the game began as Deus Ex: Clan Wars, the tactical "Deus Ex 'Action' game" mentioned in an Eidos financial report in April. "It did begin as Clan Wars," they said, "but it began to take a direction of its own."

Snowblind's "direction" falls somewhere between LucasArts' Mercenaries and Io Interactive's Freedom Fighters. Its setting is a massive civil war inside a collapsed Asian communist country (China, in this case), and it will feature large levels that provide for free-roaming and fast-paced action. In the game's single-player campaign, players will lead a squad of AI-controlled non-player character commandos, which they must protect and heal in return for their service in combat. The game will also feature drivable vehicles, including several mech-type contraptions.

Snowblind is being developed for the Xbox and PlayStation 2 by Crystal Dynamics, the Eidos-owned studio currently working on the next Tomb Raider game. It will feature an all-new engine designed specifically for the game, which will provide detailed physics, particularly when using such future-tech weapons as the "kicker" gun and a force projector known as the "riot wall."

Snowblind's story-driven single-player mode will feature 11 missions, including tactical infiltration or battlefield combat, over 16 maps. It will also have an extensive online multiplayer component, which will allow up to 16 players to battle it out in several modes with the help of voice-over IP.

GameSpot will have more details on Snowblind as they become available. 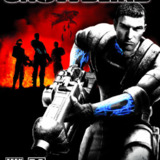