Smashing the Definition of Smash Bros.

Smash Bros. series director Masahiro Sakurai weighs in on the state of the fighting game genre and offers a few hints about the next two games.

Smash Bros. fans got their first peek at the next two entries in this series during this year's Electronic Entertainment Expo. The first trailer for the games was shown during a Nintendo Direct broadcast, revealing a familiar art style for the two games, as well as the return of Mario, Bowser, Link, Samus, Fox, Kirby, Pit, Pikachu, and Donkey Kong. Newcomers Mega Man, Villager from Animal Crossing, and WiiFit Trainer were also shown.

Last year, it was announced that Namco Bandai Games and Smash Bros. developer Sora Ltd. would be collaborating on the Wii U and 3DS entries in this series. At E3 2013, I got the chance to talk with Smash Bros. series director Masahiro Sakurai about development on these two new games, and what he thinks the fighting genre needs to continue thriving.

Back in 2011, in an Iwata Asks column reported on by Andriasang, Nintendo president Satoru Iwata and Sakurai revealed that the Wii U and 3DS versions of the next Smash Bros. would be connected in some way. When pressed for specifics at this year's E3, Sakurai noted that players would be able to customize and transfer characters between the two versions, and said that the development team was committed to keeping the roster similarly balanced between both versions.

"I like to think of Smash Bros. as a game with lots of interesting accidents. For example, you might have a terrain change that signals incoming damage from a hazard. Those sorts of things are fun to anticipate and react to while fighting."

However, exactly what you can customize remains a mystery. I inferred a sort of Pokemon Stadium situation, where you level up your characters in the handheld version before transferring them to the console version to battle. When presented with this idea, Sakurai considered it for a moment before stating, "Perhaps the best way to think of it is: it's not the strength of the attacks that change--their power--but the directionality of those attacks will change with customization." Read into that what you will.

While the director's plans for character customization remain a mystery, his thoughts on tripping--the bane of Super Smash Bros. Brawl players everywhere--were clear. "I think we're going in a direction where we're not going to include [tripping] this time around," he stated. Tripping, a seemingly random mechanic that causes fighters to slip and fall during battle, introduced an element of randomness into each fight. But while tripping is out, randomness is something Sakurai feels is still an important part of the Smash Bros. series.

"When you boil things down to pure competition, it's not always the most engaging experience. For example, think about the 50-meter dash. This is something that really comes down to speed. You see a lot of people progressing in a linear direction, and the person who is fastest in the beginning is quite often going to be the winner. It's predictable--and while it is pure competition, it's not necessarily engaging in the same way as events with unpredictability. As developers, we have to think about all of these circumstances when designing fighting games." 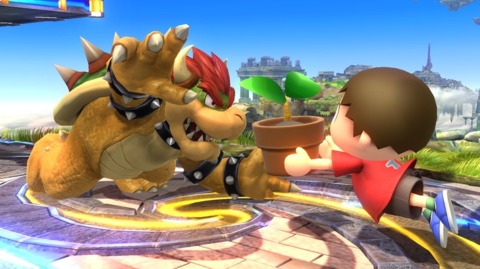 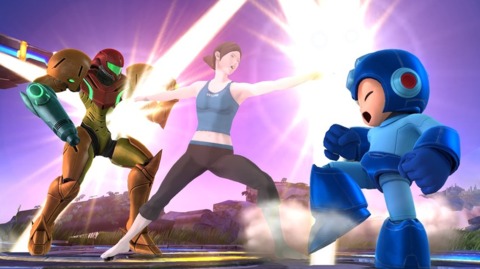 According to Sakurai, a little unpredictability not only makes fighting games more exciting, but also makes Smash Bros. less intimidating for newcomers. If you consider the entire fighting game genre, most games are designed to have the highly technical, complex style enthusiasts expect. And while this leads to some wonderfully deep games, it also tosses up a tall barrier to entry for anyone not already familiar with the genre. With a lot of hard work, this hurdle can be overcome--but it's still a hurdle too tall for the average player.

"When I began working on the first Smash Bros., there was a great focus on [highly-technical] fighting games, and that's something we've seen branch off into sort of a niche direction. Now, those types of fighting games have a very high barrier to entry for new players, while Smash was always meant to appeal to lots of people from different gaming communities. When you look at fighting game forums, you'll see a preference for Melee, and yet, I think there are lots of people in the silent majority who don't post online who prefer Brawl. Ever since I started working on the Kirby series, I've always thought about the needs of the less vocal, beginning players of games."

"I would say that the speed of gameplay [in the next Smash Bros.] is going to be a little bit less than Melee, but a little bit more than Brawl."

Considering the needs of this silent majority, and finding ways of lowering the barrier to entry, is something Sakurai feels the entire fighting game genre will need to address in the near future. "One of the best ways to look at the fighting game genre is thinking about this pinnacle--this peak--we've built up to where these games have become more of a hobbyist [genre]. I think that trend might be reaching an end." Microsoft, Namco Bandai, and Tecmo Koei are all trying to lower the barrier by offering free-to-play alternatives alongside full versions of their fighters.

"When planning the development of a new game, I always take a lot of care to discuss the concept and try to define it as best I can. For example, I like to think of Smash as a four-player battle royal action game. You'll notice that's a lot longer than saying it's a fighting game, because 'fighting game' is a completely different label. You can talk about a fighting game or an action game or a racing game, but as soon as you define your game specifically in those terms, you start limiting your creative range because you're thinking of the limitations of that genre. Perhaps the best thing we can do now is start with a concept rather than a genre. If we can do that, perhaps we can grow the whole idea a little bit."

There are 415 comments about this story
Load Comments (415)