As video game consoles become more powerful, the graphics in the games we're playing at home are starting to equal or surpass those found in arcades. As a result, arcade attendance is dwindling. The upshot is that a developer can do a home conversion of its game and know that a majority of gamers probably missed it in the arcades. Such is the case with Smashing Drive, a racing game released by Namco. The game popped up in arcades earlier this year and was hard to find unless your neighborhood arcade is one of the few that tries to keep current. Fortunately the game will be given another lease on life with its upcoming conversion to the GameCube, courtesy of developer Point of View. We got a look at an early build of the game, which features some graphical polish and a new mode, and we were pleased by what we saw.

The game's premise is that you're a cabbie behind the wheel of a supercab, racing through the streets of New York to get your fare to his or her destination as quickly as you can. While Smashing Drive's premise may sound a bit like that in Sega's Crazy Taxi, the actual execution is quite different. Featuring power-ups and a different variety of over-the-top action than Crazy Taxi, Smashing Drive is much more of a racing game.

You'll find three modes in Smashing Drive on the GameCube: arcade, head-to-head, and survival. Arcade is broken up into four "shifts": early bird, rush hour, night owl, and dusk and wired, which is unlocked when you place high in the first three. In addition, if your score is high enough in each shift, you'll be rewarded with a bonus level at the end of each shift. The chaotic bonus level will find you racing through the same shift you just completed but with a new array of hazards and weirdness to contend with. Head-to-head is the game's two-player multiplayer mode in which you and a friend square off against each other in a race to the finish in a vertical, horizontal, or diagonal split screen. Finally, survival mode puts you through the ringer to see how long you can last in a blitz of back-to-back races.

Smashing Drive remains true to its arcade roots and retains its accessible gameplay, which is good and simple: Get to the finish any way you can before time runs out. You'll find quite a few things in the game to keep the action interesting. Pedestrians, traffic, and other city weirdness will crop up to block your way. Multiple paths through the city and power-ups will both help and hinder your progress if you're not careful. You'll find the power-ups in balloons strewn about the levels. Turbo gives you a speed boost, cutter allows your taxi to use a front-end buzz saw to tear through obstacles, crash mounts a battering ram on the hood to bust down anything in your way, wings attaches glider wings to your cab and lets you float for a bit after a jump, sonic blast sets off a horn that destroys most things onscreen, repair restores your vehicle's health, and 4x4 turns your cab into a monster truck that can power over and up just about anything, including buildings. In addition, you'll find a point bonus power-up that increases the number of points you get as you go through the level, a time power-up that will increase the amount of time on the clock, and a random power-up that gives you any of the above.

Graphically the game features quite a few improvements over its arcade incarnation, thanks to the GameCube hardware. The early build of the game already ran at a near constant 60 frames per second- a noticeable improvement over the arcade's less stable framerate. The environments were large and brightly colored and had a hectic, cartoony look. The GameCube's impressive texture compression has allowed Point of View to keep the game's textures clean and slightly better than arcade perfect in spite of the fact that the arcade version had access to a great deal more texture RAM. The only rough spot we saw was that the various pedestrians running everywhere were still blocky. However, you won't spend too much time ogling the scenery because the game's emphasis is definitely on speed. You'll find yourself tearing through the town in search of the next checkpoint and barreling up, over, or through anything that gets in your way. There will be a pleasing amount of graphical lunacy as you tear through an airport and wind up on the runway speeding under and over planes. The only minor change from the arcade is that cinemas that played between levels showing your fare getting in and out of your cab have been omitted.

Though the build we played was early, the game was a lot of fun. Once you get the hang of going through levels, you'll get bolder and start exploring the side alleys and alternate routes. We tore up a fire truck's ladder and through a burning building on one level. You'll also find some bizarre moments if you're inquisitive and skilled: It's possible to find and follow a giant ape through the city and knock him off a building. That kind of exploration and experimentation is encouraged, because your end-of-level score will take into account a variety of factors including the risks you took. An added challenge will have you trying to beat a rival CPU character for the best time in each shift.

So far Smashing Drive is shaping up to be a lot of fun. It features accessible arcade-style gameplay and smooth graphics and should provide GameCube owners with a solid playing experience when it hits early next year. 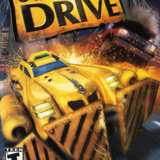