My created wrestler in WWE SmackDown! vs. Raw 2010 is named Rich "Bill" Barnhardt; he&#39;s a highflyer with a purple Mohawk and purple back hair to match. He also wears oven mittens--the left hand bears the Mexican flag; the right hand proudly displays the Canadian flag. In the middle of his... 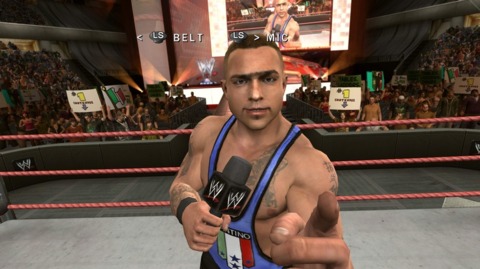 My created wrestler in WWE SmackDown! vs. Raw 2010 is named Rich "Bill" Barnhardt; he's a highflyer with a purple Mohawk and purple back hair to match. He also wears oven mittens--the left hand bears the Mexican flag; the right hand proudly displays the Canadian flag. In the middle of his torso, he has a tattoo that states simply, "Hi!!" Clearly, Rich Barnhardt is going places in the WWE. But, midway through his story in Road to WrestleMania mode--one of the many game features in the upcoming WWE SmackDown! vs. Raw 2010--Mr. McMahaon decides to completely change his gimmick. Instead of rocking the cool eMo-hawk, my boy Barnhardt is forced to don neon green tights, as well as affect a disgusting-looking moustache and mullet. Now, he basically looks like a cross between Eastbound & Down's Kenny Powers and Shawn Michaels from their day with The Rockers.

I guess you do what you have to do to make it to the biggest show of all: WrestleMania.

Road to WrestleMania mode isn't new to SVR 2010--but the mode has been expanded this year to be more full featured than ever before. There are more storylines that feature some of the biggest stars in the WWE, including a Diva storyline, a story for your created wrestler, and a two-person storyline that can either be played solo or with a friend in a mix of cooperative and competitive gameplay. Here's a quick look at the WWE superstars and their storylines:

Edge
When the SmackDown general manager position is opened up by Mr. McMahon, Edge manipulates things so that his girlfriend, WWE Diva Maria, is installed at the position. With the GM in his pocket, the ultimate opportunist begins wreaking havoc in the ring and backstage, much to the chagrin of Mr. Kennedy.

Randy Orton
The Legend Killer forms an early alliance with his familiar posse--Ted DiBiase and Cody Rhodes--and begins a feud with two of the biggest, baddest superstars around: The Undertaker and Kane. At one point, Orton battles it out with The Undertaker in a hell-in-a-cell match at the Royal Rumble pay-per-view.

Mickie James
The first Road to WrestleMania Diva storyline features Mickie refusing to take part in a bikini contest (boo!). When Maryse steps into the ring and threatens her, Mickie gives her a slap (yay!), and it's on. With appearances by such WWE Divas as Kelly Kelly, Beth Phoenix, and Natalya, as well as a Diva Rumble during the Royal Rumble, this one is the best-looking storylines (at least in terms of competitors) of them all.

Triple H/John Cena
Mr. McMahon is looking to set up a cross-brand rivalry between Raw and SmackDown! by pitting its two champions against one another. You can play this storyline solo or try it with a friend. One person will play as The Game and the other as John Cena with the pair looking to take on the combined forces of Chris Jericho and MVP. The Miz and John Morrison also make an appearance in this storyline, offering their unique analysis on Cena and Triple H via The Dirt Sheet.

Shawn Michaels
The Heartbreak Kid forms an early alliance with CM Punk, while JBL and Randy Orton look to test the wrestler known as Mr. WrestleMania. If you think "Sweet Chin Music" will be played multiple times, you're absolutely right.

Created Wrestler
As with all the other Road to WrestleMania storylines, the story featuring your created wrestler is fully voice acted (you'll choose a voice for your wrestler when you create him). Early on in the CAW storyline, you'll face off against the one and only Santino, who calls you out as you're watching one of his matches in the audience. After teaching Santino a lesson in the ring, your goal becomes not just to keep the Intercontinental belt you won, but also to earn an actual legitimate contract in the WWE. But Mr. McMahon will have a thing or two to say about that...

Regardless of which storyline you play, you'll occasionally run into mandatory and optional goals in the matches you play. With a mandatory goal, you must complete that objective in order to move forward in a particular storyline; completing optional goals will earn you cool unlockables, such as new characters to play as or alternate costumes. These goals run the gamut from simply beating an opponent within an allotted period of time to slightly more elaborate objectives, such as making sure each of your opponents in a tag match receives your wrestler's finishing move twice. 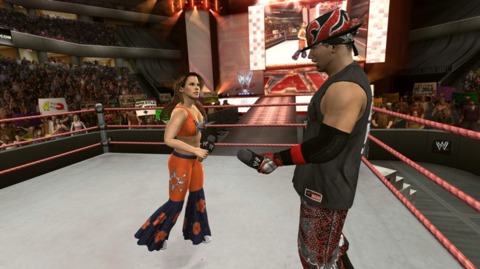 Most of the goals and matches take place in the ring, naturally, but there are a couple of backstage encounters. During one scene in Vince's office, Vladimir Kozlov and Ezekiel Jackson look to teach you a lesson, and while you fight them off, the goal is to create as much damage as possible to Vince's office. You'll do this mainly by bouncing Vlad and Zeke off any of 10 hotspots in the room, including a Mr. McMahon-shaped bust, a couple of bookshelves, and a television set.

Every once in a while, you'll encounter a sequence in which you have a choice to make (such as whether to respond to one character or another) but, for the most part, the storylines in Road to WrestleMania mode are pretty linear and straightforward. That said, there are some great moments, including at least one jab at videogame fans that had me chuckling. Naturally, there's a backstage hub for the mode where you can do things like save your game, grab voicemails from other WWE Superstars and, in the case of your created wrestler, alter his outfit slightly.

When playing Road to WrestleMania with your created wrestler, you'll be earning attribute points as you go. The better you perform in a match, the more points you'll have to put toward such attributes as strength, speed, grappling, charisma, and more. In fact, whenever you play with your created wrestler in SVR 2010, you'll have an opportunity to earn these attribute points, which is a great way to quickly get him or her up to speed with the biggest and best in the business.