One peek at GameSpot&#39;s live video reveal of the complete roster of the upcoming WWE SmackDown! vs. Raw 2010 and it&#39;s clear that THQ and developer Yuke&#39;s are cramming a bunch of content into the game. In addition to a roster packed with WWE SuperStars and Divas as well a focus on... 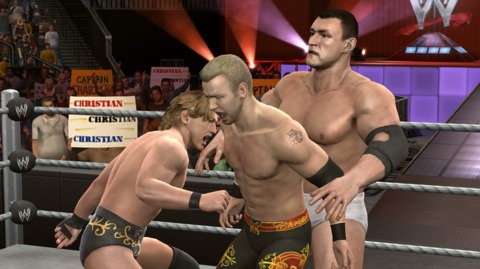 One peek at GameSpot's live video reveal of the complete roster of the upcoming WWE SmackDown! vs. Raw 2010 and it's clear that THQ and developer Yuke's are cramming a bunch of content into the game. In addition to a roster packed with WWE SuperStars and Divas as well a focus on creation tools (including the brand new story designer, which sounds like a load of fun), the game will also have a ton of match types to compete in. Today, we've got a look at two of the match types in the game, Championship Scramble and Royal Rumble.

Mix a timer together with a fatal four-way match, and toss in a championship belt up, and you'll have an idea of how the Championship Scramble works. In this brand new match type, two wrestlers start off the match and a new competitor enters at specific intervals during the timed match. Eventually, five wrestlers are in the ring at once and if any one of them scores a pinfall, he is declared the title holder. The last man holding the title once the timer runs out leaves as the champion.

You have three match-length options in the Championship Scramble matches: five, ten, or twenty minutes and you can choose when your wrestler enters the ring or set it to random. The longer the match, the larger the interval you have until new wrestlers enter the ring so, if your wrestler is in early, the most successful strategy seems to be to work over your opponent as quickly as possible and get a quick pinfall. From there you can do your best to stay away from the opponents until the end of the match. Once the ring fills up with more wrestlers, successful pins are hard to come by, as the AI wrestlers will inevitably break up each pin attempt. Anything goes in this match, including the use of foreign objects like chairs, sledgehammers and two-by-fours, so you'll need to be on your toes at all times.

A fan favorite in the real WWE, the Royal Rumble features a constant stream of WWE SuperStars entering the ring, each of them looking to survive and win this prestigious match. In the game, you'll be able to play three variations on the Royal Rumble: 10-man, 20-man, and 30-man, the last of which turns out to be a Herculean task of survival, especially if you're called into the match in the early goings.

As with the Championship Scramble matches, you'll be able to select which SuperStars take part in the Rumble, as well as which wrestler you control. You can set your wrestler's entry round or set it to random and take your chances. Once the match begins, it's a matter of waiting until your number is called and watching the mayhem unfold in the ring. Wrestlers are eliminated from the Royal Rumble only if they are tossed out of the ring, and it's common for alliances to be formed and broken at any moment as wrestlers gang up to get opponents out of the ring.

Once your wrestler is in the squared circle, you'll be looking to chop, slap and slam anything that gets in your way, while doing your best to avoid getting ganged up on. With lots of wrestlers in the ring at once (I counted a maximum of six in the ring during our time with the game), your best bet for success will be to take advantage of someone else's weakness: look for Superstars that are getting ganged up on and wait for a chance to push them over the top rope. If a wrestler is struggling to put someone over the top, you can join in on the action and help him out as well.

Unlike previous versions of the Royal Rumble, ring-outs in SVR 2010 won't just be button-mashing minigames. There are several different types of ring-outs in the game, each with a slightly different control scheme:

Middle rope elimination: The most straightforward of the bunch, this ring-out is accomplished by rapidly pressing the button shown on screen. If you've got an AI wrestler or two helping out, the chance of eliminating your opponent increases. If you're on a defense and have a finisher stored up, you can instantly escape middle rope elimination by pressing the right bumper (R1 on PS3).

Bottom rope elimination: When attempting an elimination here, a meter will pop up; to ring-out your opponent, you'll need to stop a cursor in the meter's blue target zone by pressing the A button (X on PS3). If you've got a finisher on defense, you can escape by pressing the right bumper (R1).

Corner elimination: This one's all about timing. When attempting to eliminate an opponent in the corner, you'll see a button icon appear on screen; press it before your opponent and you'll gain an advantage--do it enough times and you'll eliminate him. Again, if you have a finisher stored you can escape a corner elimination by pressing the right bumper (R1). 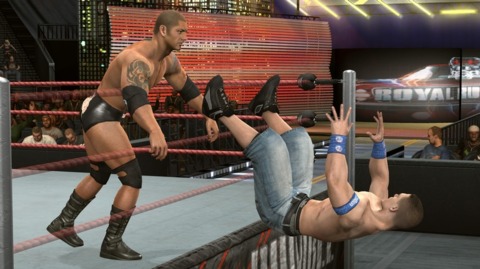 Naturally, conserving your energy in the Royal Rumble is of supreme importance. Unless you're the last one in the ring, you can inevitably count on some of the biggest WWE stars coming late in the match. In one Rumble I played--using Finlay who had entered early on in the bout--I made it all the way to the final pairing only to be eliminated by a relatively fresh Triple H. Surprises are common in the Rumble; in one case, you might think you've got a wrestler ready for elimination, only to have him flip over the top rope, land on the mat and roll back into the ring.

As elsewhere in the game, you can use created wrestlers in both Championship Scramble and in the Royal Rumble but, unless you've spent some time building up their attributes, they won't be much challenge for the heavy hitter Superstars. One of the best ways to beef up your created wrestlers is to spend some time in SVR 2010's story mode, known as Road to WrestleMania. We'll have a look at the mode, its multiple storylines, and how you progress your created Superstars in the game, in our next look at the game on Wednesday, October 7.