A new game from publisher Devolver Digital is launching on the Epic Games Store today, May 28--and it won't cost a cent. The game, Sludge Life, has been on our radar since it was announced for its wild sense of style and mellow graffiti gameplay. It's also full of cat butts, and features a dedicated button for farts, as all games should.

The game involves exploring a small island on a planet with a serious sludge problem. You play as Ghost, a tagger looking to move up the graffiti food chain, and a lot of the game involves committing vandalism. There are no specific objectives given to you, but there are three potential endings to be discovered.

The game's launch trailer is below, and once you're done watching it you can jump onto its Epic Games Store page and download the game for free.

Sludge Life will be free on the Epic Games Store for 12 months, so you don't need to rush to grab it. It's also due to release on Nintendo Switch at some point, but that version will not be free.

If you end up loving the game and want to spend some money on it, the Sludge Life shop features plenty of merch, including a 7" vinyl and an ashtray/lighter set. But there's no obligation to do so, and no catch here--just a totally free game.

The soundtrack to the game has also been released. You can buy it on Bandcamp for $7, or listen on Apple Music and Spotify.

If you're after more free games, here's everything you can nab right now. 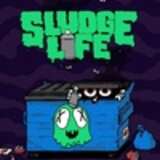