"Our job now is to show people that we’re not making Call of Duty," Publisher Victura said about Six Days in Fallujah.

The once-dead, now-revived tactical first-person shooter Six Days in Fallujah has been embroiled in controversy since its inception for depicting a deadly battle during the Iraq War. Now, Publisher Victura is again defending its embattled title, saying developer Highwire Games is "not trying to make a political commentary" about the conflict.

In an interview with Polygon, Victura head Peter Tamte said that the purpose of Six Days in Fallujah is to highlight "the complexity of urban combat" by putting players in the shoes of real-life Marine soldiers who must contend with the decisions made by people in power.

"For us as a team, it is really about helping players understand the complexity of urban combat," Tamte said. "It's about the experiences of that individual that is now there because of political decisions. And we do want to show how choices that are made by policymakers affect the choices that [a Marine] needs to make on the battlefield. Just as that [Marine] cannot second-guess the choices by the policymakers, we're not trying to make a political commentary about whether or not the war itself was a good or a bad idea."

This begs the question, though. If Highwire Games and Victura aren't taking a stand on "whether or not the war itself was a good or bad idea," then what's the game's point? According to Tamte, the reason he's pursuing it again is so people don't forget about the war.

"A message that I heard from all of the people who've lost loved ones in battle is, they don't want their child or friend's sacrifice to be forgotten," Tamte said. "Even the ones who were very opposed [to the war in Iraq]. And I had conversations with many of them, as well as other members of our team--especially former military who are on our team [that] had conversations with many of these families in 2009--and we heard one after the other, 'We don’t want you to make a game about this, but we don't want our son's sacrifice to be forgotten.' It's a mixture of that. The reality is that most people are not aware of the battle for Fallujah."

The Second Battle of Fallujah--Six Days in Fallujah's narrative focus--took place between November and December 2004, the peak of the Iraq War conflict. The six-day battle in particular saw hundreds of casualties--many of which were unarmed Iraqi civilians. According to the humanitarian group the International Red Cross, as many as 800 civilian lives were lost by inhumane means, such as using the chemical white phosphorous as a weapon by the US. The Iraq War was fueled by false allegations from former President George W. Bush, who claimed without evidence that Iraq was building weapons of mass destruction. The invasion by US forces has resulted in thousands of civilian deaths during the conflict.

Tamte doesn't think Highwire Games or Victura have to contend with this backdrop, though he noted players shouldn't walk away from Six Days in Fallujah thinking we need more war.

"I don't think players are going to be confused about the cost [of war]," Tamte said. "I just don’t think that they're going to walk away from this experience going, 'We need more war.'"

Dodging questions about the political substance of games is something the industry often does, as evidenced by Ubisoft during the initial launch of The Division 2. However, industry veterans aren't easily fooled by the thin veil, like Naughty Dog co-president Neil Druckmann, who took to Twitter to criticize people who make games with "serious subject matter."

If your game deals with serious subject matter then it is inherently political. If that’s a problem, make a different game... otherwise you owe it to your game to lean into it, doing your damnedest to treat as honestly, completely as possible. Warts and all.

Ultimately, Tamte said he understands people's reservations about Six Days in Fallujah. It's a complicated conflict that deals with complicated circumstances staining US history. Still, Highwire Games and Victura aren't making a Call of Duty experience and that, Tamte hopes, will give him and his team the leeway to share stories that shouldn't be lost to time.

"We share the same objective they have, which is, we don't want their son's sacrifice to be forgotten," Tamte said. "But do I understand their caution about it? Absolutely. Absolutely. Because for most of those people, their only idea of a video game is watching somebody else play Call of Duty. Call of Duty is a sport, and if somebody made a sport out of the killing of my son, I'd be pretty upset. Our job now is to show people that we're not making Call of Duty." 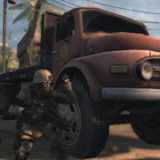