Sin and Punishment is a unique shooter loaded with giant bosses and sweeping set-piece battles.

Regardless of whether you believe Nintendo cancelled the intended English release of Sin and Punishment because of low Nintendo 64 console sales or because the game's dark content didn't jive with the Big N's kid-friendly image at the time, one truth is undeniable: Players in the West missed out on one of the N64's defining games. For years, the only people who could play it were those who spent nearly $100 to import the Japanese version of the game. For most buyers, this turned out to be an exorbitant price to pay for an arcade-style "rail" shooter that--while dripping with slick production values--could be finished off in one short sitting. Thankfully, time and Nintendo have conspired to finally make things right by bringing this unique postapocalyptic bullet fest to the Wii's Virtual Console service for the comparatively reasonable cost of 1,200 Wii points ($12).

The easiest way to describe Sin and Punishment is to say that it's a rail shooter similar in spirit to Panzer Dragoon or Space Harrier but with some character-based action mixed into it. Swarms of aliens constantly appear from deep in the background, and you have to use the analog stick to guide the onscreen targeting reticle. All the while, you must use the D pad and buttons to help your character dodge, jump over, or dash through any attacks that may come near as they automatically run or fly through the level. You can toggle between lock-on and manual targeting, which offers a score multiplier, as well as perform a macho sword attack that can cut nearby enemies in half then reflect enemy bullets back to their source. But, most importantly, there's never a shortage of alien bugs, soldiers, and ships to shoot, which all explode into satisfying bits.

Like most games developed by Treasure, Sin and Punishment is loaded with grandiose set-piece battles. Giant tanks and robots are commonplace. At one point, you become a huge, Evangelion-like creature yourself and fight one-on-one with an equally massive beast. Roughly halfway through the game, you'll take to the skies and participate in a battle at sea against dozens of aircraft carriers. The sweeping camera viewpoint affords frequent money shots of the fleet below. The action never slows down, even when the screen is literally full of laser blasts and buzzing airplanes. The final battle pits you against an entire planet! Most of the characters have a fairly blocky look, but there are usually so many of them onscreen (and there's usually so much happening at any given moment) that you won't have an opportunity to dwell upon how simple any individual object looks. Between battles, the story scenes feature a healthy amount of English voice work. The acting is stiff but in a charming, B movie sort of way. Treasure was extremely ambitious with Sin and Punishment; thus, time has done very little to dull the game's intensity.

The game's Achilles heel is that it doesn't take long to finish. On the default easy setting, you can breeze through all 10 stages in about half an hour. If you crank it up to normal, it may take you a couple of hours of continues and restarts. However, you can choose to draw out the experience by trying to limit your use of continues and by trying to set high scores. Certainly, the action is crazy enough on its own to warrant playing through multiple times.

On the Virtual Console, Sin and Punishment basically looks and sounds just like it does on the Nintendo 64. The graphics look sharper and cleaner; however, the overall texture quality and polygon count haven't changed. Some people may have trouble acclimating to the controls because the GameCube controller and Classic Controller attachment aren't perfect analogs to the Nintendo 64 controller, but it really doesn't take more than a few minutes in either case to iron out the kinks. Given a choice, you'll want to use a GameCube controller because the D pad and right analog stick are placed where your left and right thumbs can rest on them without any reaching.

When Nintendo first announced that it would be bringing formerly Japanese-exclusive games to the Virtual Console service in North America and Europe, the collective Internet hoped that Sin and Punishment would make the cut. Yes, Virginia, there is a Santa Claus. In its day, it was a dicey value proposition given the expensive import price tag and overall brevity of the game. But now, at a price of just $12, Sin and Punishment is a whole lot more appealing, and a whole new audience can experience this bizarre and exciting shooter. 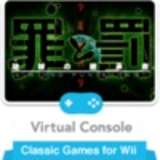