Sim Theme Park, the sequel to Electronic Arts and Bullfrog's Theme Park - the game that let you run an amusement park empire - is coming to the PlayStation this fall. As in the original, your job is to design and manage all aspects of your amusement park and ultimately keep the kids coming back for more.

So how do you make a bunch of kids happy? The answer is simple: Build a theme park that's fun. What isn't so simple is how your park is constructed, maintained, promoted, and designed. And that's the focus of Sim Theme Park (formerly known as Theme Park World).

Sim Theme Park deviates from the standard RTS-style control of any standard strategy game. One of the problems the developers addressed early on was the mouse-style control. On the PC, the mouse is the logical control choice, but on the PlayStation, ports of mouse-controlled games end up jerky and somewhat difficult to control. So EA simply did away with the cursor itself and constructed a completely new engine from scratch. Without a cursor, the D-Pad simply moves about the environment from a bird's-eye perspective and can be rotated using the shoulder buttons. This style of control makes it extremely easy to use, and it flows very nicely. For selection purposes, you can simply move an object to the center of the screen where it will automatically highlight.

Another excellent example of deviation from the standard PC port is the menus - or lack thereof. On the PC, you can simply manage everything in its own window, and you don't have to bother with tons of windows in the foreground. The developers decided to keep things separate on the PlayStation. So, to manage your empire, you'll access your laptop. Once inside the laptop, you can manage everything from a tree of menus. Like Ape Escape, Sim Theme Park has four standard buttons that let you access different parts of the game, and a small HUD in the corner that explains your options.

Sim Theme Park takes place on a group of islands, each with its own theme. The different themes have theme-inspired rides, shops, and atmosphere. The point of the game is to build a well-designed theme park. This doesn't always mean building a certain amount of rides or striving for a prestated goal. Instead, the game rewards players for designing wisely. The levels contain a certain amount of gold tickets, which can be redeemed to unlock other islands. The gold tickets are rewarded for smart designing skills. For example, you'll get a gold ticket for putting the restrooms in an appropriate area, perhaps surrounded by trees and such. But the gameplay requires more than just collecting a bunch of gold tickets. The level doesn't end once you've gotten all the gold tickets available to you - it ends only when you want it to. If you're happy with your park and wish to develop further, you can.

This isn't simply one of those predesigned drop-and-forget strategy games. Everything is customizable, from ride length to speed to capacity. Rides can be upgraded for better stats, and rides that run on a track - such as roller coasters or waterslides - are yours to design. Want to give your riders a fifty-foot drop followed by a loop? Do it. But be careful - because of the game's actual physics engine, your trains will stick or collide if your track design isn't physically sound.

But every theme park needs more than just rides. You'll be able to build shops, construct restaurants, hire entertainers, and more. And those are just as customizable. Want to sell cheap helium balloons for thirty bucks a pop? You can. But don't expect the kids to be happy with that. In fact, you may just have to hire extra security to prevent disgruntled kids from covering your park with graffiti.

Once you're happy with your theme park design, you'll be able to switch to a first-person mode and take a stroll around your park. Make sure you bring your camcorder, as you'll also be able to ride your roller coasters. One of the coolest features is this mode is an option to take screenshots of your happenings and save them to your memory card.

Sim Theme Park looks to be years ahead of its predecessor, and it's shaping up to be a very nice-looking game. So if you're itching to design some coasters, ride some thrillers, or build an amusement park empire, keep your eyes peeled on this game. 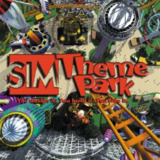