Sierra to bring Futurama game to the US

The game based on the cult-hit cartoon is coming in August.

As part of its pre-E3 briefing, Sierra has announced its plans to release a game based on the TV show Futurama. The game, which was previously announced for European release, is being developed by UDS and is scheduled to hit the PS2, GameCube, and Xbox on August 12.

The game's story centers on time travel, with the main characters going back in time to stop Mom's plans for world domination. The game will feature 25 levels spanning five different environments. The cinematics have been written by the show's original writing staff, and the game is said to contain the equivalent of two episodes' worth of content.

We'll have more on Futurama as it becomes available. 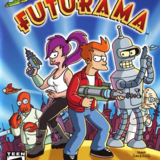