The next game from Civilization designer and industry veteran Sid Meier has been revealed. 2K and Firaxis Games today announced Sid Meier's Ace Patrol, a World War I-set air-combat game launching May 9 on iOS as a free download.

The game was conceived, designed, and programmed by Meier himself. In Ace Patrol, players pilot vintage aircraft and must defend their base camp and allies from invaders.

Thirty upgradable historical World War I aircraft and more than 120 missions will be available in Ace Patrol. In addition to a turn-based single-player mode, the game will offer two-player multiplayer either locally or through asynchronous play via Game Center.

Ace Patrol joins a growing list of mobile games from Firaxis, following Haunted Hollow (launching May 2 in the App Store) and XCOM: Enemy Unknown, which will launch this summer on iOS. 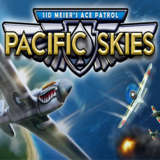