Namco today announced that it will be publishing Shogun Warrior: The Lost Army for the DS this October. The game is being published by UK studio Box Clever Interactive.

Shogun Warrior tells the story of two brothers locked in a heated battle in feudal Japan. Gamers will play as one of the brothers vying for the title of shogun and will control armies battling for control over territories.

The game will use the dual-screen feature of the DS by letting gamers plan battle strategy using the touch screen while the action unfolds in 3D on the top screen. Minigames such as duels, naval battles, and castle sieges will also play out on the touch screen. Using the DS's wireless capabilities, up to eight players can duke it out in the game's multiplayer.

Shogun Warrior: The Lost Army is waiting rating and pricing information. GameSpot will have more on the game as information is released. 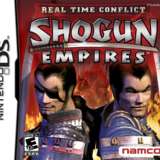