It's a light week for new releases at retailers, and many of the games coming out are arguably not new at all. A handful of remade ports and a compilation make up most of the notable releases this week, but that doesn't include the two most significant releases.

First up is the third Fallout 3 expansion, Broken Steel, available for the Xbox 360 and PC editions of the game on May 5 for $10 (800 Microsoft points). 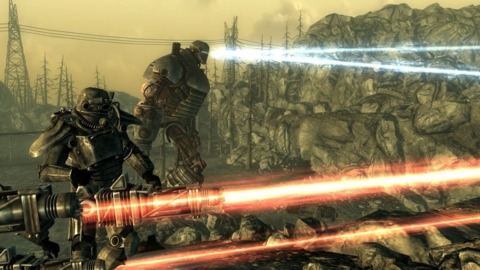 As detailed in GameSpot's recent preview, the add-on will raise the game's level cap from 20 to 30, as well as add in approximately five to six hours of additional content, according to the publisher. Set around the primary locations in Fallout 3's main storyline, Broken Steel will also be set after Fallout 3's controversial original ending. For more on the expansion, check out GameSpot's interview with game designer Alan Nanes.

The week's other big name is Sony's Patapon 2 for the PSP. Not only is Patapon 2 the sequel to last year's critically applauded new take on the rhythm game genre, but it's also available only in downloadable form. Interested gamers can still pick up the $20 game from retailers, but they will only be buying a code that they must then use to download the game itself to the PSP. The sequel builds on the foundation of the first game with new units, new abilities, a branching leveling system, and a brand-new multiplayer mode.

As for more vintage fare, this week sees the Wii release of Namco's classic original PlayStation platformer Klonoa. The game has players controlling the floppy-eared mascot through 3D worlds, but on set paths that make for 2D gameplay. The Wii revamp features updated graphics as well as the incorporation of motion controls. Purists who prefer to play with controls more akin to the original's will have the option of using a Classic Controller or a GameCube pad.

Also out for the Wii this week is the latest GameCube redux from Nintendo's New Play Control line, Donkey Kong Jungle Beat. When the game first came out in 2005, it made use of the GameCube's DK Bongo controller, letting players tap on the drums to command Donkey Kong through the platforming adventure game. That interface has been replaced with the Wii Remote and Nunchuk, which make the game control more like a traditional platformer.

Other revamps this week include the DS debut of the PC turn-based strategy game Jagged Alliance, as well as Crysis: Maximum Edition, a compilation of the PC shooter Crysis, its multiplayer mode Crysis Wars, and the stand-alone expansion Crysis Warhead.

For further details on the week's games, visit GameSpot's New Releases page. The full list of downloadable games on the PlayStation Store, Xbox Live Marketplace, and the Wii Shop Channel will be revealed later this week. Release dates are based on retailer listings and are subject to change.