We find out what it's like to own our own geo-fortress in an extensive hands-on preview of Shining Force Exa.

Shining Force fans waiting for a return to the series' strategy role-playing roots will just have to keep waiting. The next game in the series, Shining Force Exa, is an action role-playing game just like 2005's Shining Force Neo. But before you get all up in arms about how Sega is ruining a classic franchise, you should finish reading this preview. We played through the first four chapters, and based on our time with the game it looks like Exa is shaping up to be a charming, challenging adventure that fans of Neo should definitely keep an eye on.

Shining Force Exa opens with the hero of the story, a young boy named Toma, hunting a large boar. After a quick introduction to the combat you kill the boar and are joined by two other characters who are looking to get a share of the meat. There's a noble centaur knight named Gadfort, and a gluttonous elf ranger named Maebelle. After heading back to a small village for dinner you are joined by another adventurer, a young magic-using girl named Cyrille and her little dragon-like pet named Zhirra. After some brief introductions you learn that the four characters have banded together to search for a legendary sword known as the Shining Force. According to the legend, whoever is able to draw the sword from its resting place will become king of the world. It's a setup that you've seen a dozen times before, but the dialogue is entertaining and the characters seem likeable enough to at least partially excuse the seemingly generic plot.

We didn't see any familiar characters in the first few chapters of the game. There were no birdmen or beast men as in previous Shining Force games, but we did only see a small handful of characters. Later in our time with the game two young magic users joined our party. Amitaliri is a feisty girl who uses attack magic and bosses around her friend Faulklin, a boy who specializes in healing magic.

Eventually you and your group of adventurers set out from town to search the surrounding area for the Shining Force. After a short trip up a mountain you come across a cave, and in that cave is (surprise) the fabled sword. Three of the heroes have a go at pulling the sword out of the stone, while Cyrille looks on with apprehension. It seems that the young mage knows something that the others don’t. We won't spoil the scene for you, even though it's immediately obvious which of the heroes will be the one to succeed in drawing the sword.

When the sword is drawn a huge geo-fortress suddenly comes to life and rises out of the ground. A strange dog creature named Zenus informs you that he is the caretaker of the fortress, and that as the heritor of the Shining Force, the fortress is now yours to do with what you please. Unfortunately since the fortress has been buried underground for so long, it's not exactly in working order. Many of the systems need to be restarted, but in order to do that you have to collect special rare metals.

At this point you have to split into two parties. You can control either Toma or Cyrille, and can have up to two other characters in your party. The remaining characters stay back at the fortress while you go about your adventures. When running through the many caves, forests, and fields in the game you'll encounter mobs of enemies. You can control your main character and press the X button to unleash strings of attacks. Toma is proficient with swords, while Cyrille thumps enemies with her magic book. You can hold the attack button to charge up a special attack, and you can also equip magic spells and use them with the Triangle button. Cyrille starts out with a blaze and freeze spell, but you can purchase different books that give her different spells. Toma starts out with a single wind spell, but he's more of a melee fighter, using either light blades or huge two-handed swords.

You can have up to two other characters in your party at any given time, but you only directly control either Cyrille or Toma. The other characters will go about attacking enemies and healing allies as they should, and for the most part the computer-controlled characters hold their own in battle. To give you a bit of control over your backup characters you can find special items throughout the game that you can equip to your computer-controlled characters to get them to behave a certain way. For example, you can equip Maebelle with the magical archer item, and she'll hang back in battle to charge and fire magic arrows. If that's not what you want her for you can equip her with the tender archer item instead, which will make her focus on defending and healing her allies in battle. It's interesting that you have to find these items before you can actually exert any control over your characters, but we noticed a substantial change in the way our characters behaved in battle based on how we equipped them.

The combat is fast paced and involves a lot of mashing on the X button. You usually fight at least half a dozen enemies at a time, and sometimes two or three times that amount. In the first three chapters of the game the battles are all very easy, but the difficulty quickly ramps up in the fourth chapter when you start defending your fortress against attacks. While one party is out exploring a dungeon to find a rare metal to upgrade the fortress, you'll often receive a message from Zenus that your fortress is under attack. When this happens you automatically take control of the character you left back at the fortress. You then take that party out to a battlefield near the fortress to fend off the attack. During these battles the objective is to protect the photon converter, which powers the defenses of the castle. There is usually a large boss creature that appears, and if you can defeat it you'll instantly win the battle. These battles can get extremely difficult though, because you'll often be fighting several dozen enemies at a time.

In both the normal battles and the geo-fortress defense battles, you'll want to find the enemy generator and destroy it to make the enemies stop appearing. These generators are large globe-shaped structures that are shielded by enemies. In order to damage the generator you first need to defeat all the enemies around it, which will weaken the generator so you can damage it.

As you kill enemies, destroy generators, and break crates and barrels, you'll find items such as gold, weapons, armor, and mythril. You can use mythril back at your fortress to strengthen your characters by mastering power arts. These arts do things like increase attack damage, strengthen defenses, and boost magic spells. You can distribute the mythril you find to customize your characters, and you can also use the mythril to learn new special moves.

You can also upgrade your geo fortress using special core metals that you find throughout the world. Just like customizing your characters, you can customize your geo-fortress by increasing its shields and powering up a cannon that can be used to shoot enemies from afar. You can also spend core metals to unlock a training dungeon where you can take your characters for some much needed level grinding. Eventually when you find special rare core metals you'll be able to completely change the form of your geo-fortress. There are three different forms in the game, and each form has special attributes relating to defense, recovery, and attack.

When you're out in the field on a quest you can warp back to the fortress at any time to sell off your loot, power up your party, get healed, save your game, or switch out your characters. There's also a warp point in the fortress that will take you to other warp points that you activate throughout the world, making it easy to quickly travel to various towns and dungeons. The areas we explored weren't especially vast or expansive, but they took time to plow through simply because they were all packed full of enemies. We also ran into a few areas where a sign warned us that proceeding down a certain path was optional, and only recommended for those wishing to really test their strength. We made the mistake of venturing down one of these paths and were quickly killed by some incredibly strong enemies.

The game has a colorful cel-shaded look to it, which seems to fit the fantasy theme quite well. The enemies are nicely detailed, as are all of the friendly characters. We explored some dark caves, dark forests, grassy plains, and rocky mountain paths in our short time with the game, so it looks like there will be a decent amount of variety in the environments. The spells and special moves aren't too over-the-top, but they look good, with flashy animations and effects lending some power to the attacks. The one problem that we experienced in our time with the game is a very sluggish frame rate, especially in the geo-fortress battles where there are tons of enemies on screen at once. Hopefully this issue will be remedied before the game is released.

Just like the graphics, the sound and music go well with the theme of the game. The tunes are all upbeat to match the action on screen. There's also quite a bit of English voice acting in the game, and while it's not exactly the best you'll ever hear, it doesn't sound bad, and it works well with the light-hearted dialogue to lend the characters plenty of personality.

Shining Force Exa is already out in Japan, but with so much text it's not exactly an import friendly game. Don’t fret though, because the game is scheduled to be released in North America on March 20. While you wait be sure to check out a new batch of screenshots from the game, and keep your eye on this gamespace in the coming weeks for our full review. 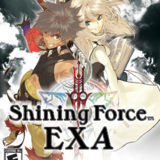